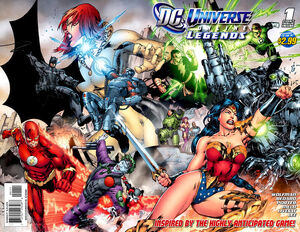 So how do you feel now, alien? Beaten...by a mere man.

The story picks up at the end of the opening game video, which was the extended trailer months ago when the heroes and villains of the DC Universe went toe to toe in a final battle that cost the lives of many on both sides. Lex Luthor finally killed Superman on the battle field with a Kryptonite spear, touting how the Man of Steel was killed by an ordinary man. Captain Cold appears out of the rubble claiming that Superman needs to survive and that he can freeze his body to be revived later. But Luthor screams, "NEVER!" and kills Captain Cold with a shot to the head, spouting, "Superman will NOT live again!"

As Luthor goes on about how he destroyed this alien menace, Brainiac's ships appear overhead, now unhampered by Earth's heroes, they unleash exobytes all over the planet, infecting all of humanity. Lex informs Brainiac's hologram that the robots that Luthor created using Brainiac's specifications are ready to be activated and Lex is ready to take over the planet. But Brainiac reneges on his end of the deal and tells Lex that once all life on the planet has been eradicated, that all of Earth's information will be stored in his computer banks and Earth will be deleted. Brainiac takes control of Luthor's power armor, but Lex manages to hack past the computers and regain partial control.

Luthor finds Black Adam barely alive in the rubble of Metropolis, but Adam knows he's dying. Luthor fights Brainiac's orders to finish off Black Adam, but begs him to say his magic word, hoping that a lightning strike will short out his suit's systems and allow him regain full control. Black Adam obliges so Lex's plan works and he regains control and fends off Brainiac's robots.

Now in human form, Adam says the word again, but nothing happens as he realizes that his other self has died. No longer any use to Lex, he allows the robots to finish off Adam's human form. Lex runs to his Lexcorp offices and escapes in a pod created for just such an emergency.

Seven years ago when Metropolis was still standing. Luthor's board meeting is interrupted by an emergency call about a problem in "Laboratory K," Luthor's off-the-grid computer in Antarctica that stores information about all the meta-humans on Earth. A robot the size of a flea is downloading all the information and the technicians can't seem to stop it.

57 minutes later, Luthor arrives at the lab and wonders how this tiny robot worked its way into this facility which was designed to keep out the likes of Batman, The Atom and even Oracle. Brainiac speaks to him through the computers and suggests they work together to finally destroy Superman. He claims that if left unchecked, that Superman will adversely affect the course of human evolution, which is what Lex has feared all along. Without Superman, all of Earth's other heroes will fall into place.

Back in the future, Luthor lands his escape pod in the desert outside a hidden telecommunications station that only he ever knew existed and that lays outside the satellite grid, so even Brainiac wouldn't know of it. He speaks out to the people of Earth all over the globe and asks for all the heroes and villains to help him take down Brainiac.

The Atom is the first to respond, by riding the comm-signal back to its source. They begin rounding up surviving heroes and villains. Luthor and The Atom greet Blue Beetle, Doctor Fate, Black Canary, Powergirl, Solomon Grundy, Mister Freeze and August General so they can begin their plans to save the world.

Retrieved from "https://heykidscomics.fandom.com/wiki/DC_Universe_Online_Legends_Vol_1_1?oldid=1422153"
Community content is available under CC-BY-SA unless otherwise noted.