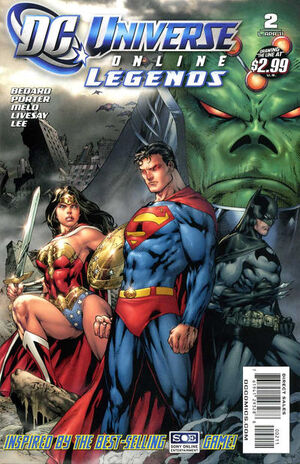 Looks like our "koombaya" moment was over before it began.

Luthor begins leading his impromptu team of metahuman and human survivors against Brainiac. The team includes Doctor Fate, Blue Beetle, Black Canary, The Atom, Power Girl, Solomon Grundy, Mr. Freeze and August General. Lex explains how Brainiac will continue his process of stealing meta-gene powers from existing heroes and villains while bottling up important cultural landmarks and data about Earth. Then the rest of life on the planet will be deleted.

Blue Beetle wonders why they aren't being led by Superman and wonders why he hasn't returned from the Sun. Luthor decides not to tell any of them about how he killed Superman with his Kryptonite Spear. Mr. Freeze and Doctor Fate turn on Lex and claim that he isn't fit to lead this group, but August General stands up and claims that if he is to follow anyone's orders in this situation, good or bad, it will have to be the smartest person in the room. Atom, being the second smartest present, looks to Lex with a sigh and asks what his plan is.

With Luthor leading from his secret base, the team separates into three groups. August General, Blue Beetle and Black Canary head to Metropolis to take a quantum scan of Brainiac's mothership. Mr. Freeze and Doctor Fate go to Keystone City in order to collect sample of the exobyte technology. Atom, Cheetah and Solomon Grundy return to Luthor's Rocky Mountain facility, but are surprised that it's guarded by the robots Lex created for Brainiac. Cheetah suggests to Grundy that the robots want to hurt her and that he should hurt them first, and fortunately he forgets that he hates cats and obliges.

In the present day, seven years earlier. Luthor oversees the prototype production of Brainiac's initial robot designs at his Rocky Mountain facility. He stops to speak to Brainiac who tells him he intends to sample human genetics as a control for his exobyte experiments by stealing an office building full of people. Despite Luthor's demands that Brainiac leave his city alone, several car-sized machines plummet out of the sky in Metropolis and impact sequentially in the sidewalk around the Daily Planet Building.

On the roof of the Planet, Jimmy Olsen points out to Perry White and Lois Lane that these "meteors" form a perfect circle around the structure, so they either dodged a bullet of chance, or they just became a bullseye. Perry turns around for Clark Kent, but he has already taken off as Superman and contacts the Justice League of America about the situation, all of whom immediately answer the call and head to Metropolis.

Using his impacted anchor pods and a small ship at the top of the Daily Planet, Brainiac creates an enormous force field that none of the Justice League can penetrate, including Superman. The people in the building begin to collapse as gas is released inside, but Batman assures everyone that they're just passing out and not dying before their eyes.

Superman recognizes the ship as Brainiac's as it lifts the building off its foundation and flies quickly toward the sky and into space. Superman follows but can't seem to catch it until it hyper-jumps out of his range entirely.

Still communicating with Brainiac, Luthor warns that if he harms Lois Lane that their partnership will be over and not to test him.

Back in the future, Solomon Grundy finishes off more of the robots while Atom and Cheetah break into the facility. Black Canary reports back to Luthor that her scan of Brainiac's mothership is complete and Mr. Freeze explains that he and Doctor Fate have collected enough samples of the exobytes. Luthor replies that once they have all returned, they will begin their assault on Brainiac. He thinks to himself that they still don't have much hope of defeating Brainiac and saving humanity since he killed Superman, but he can still settle his personal score, even if it costs the lives of himself and his makeshift team.

Retrieved from "https://heykidscomics.fandom.com/wiki/DC_Universe_Online_Legends_Vol_1_2?oldid=1422154"
Community content is available under CC-BY-SA unless otherwise noted.