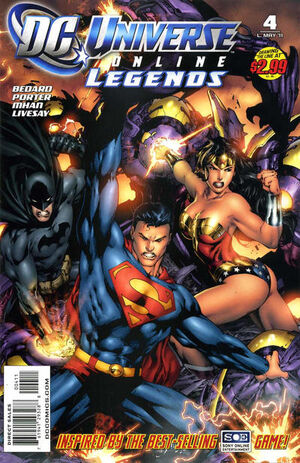 Superman and Batman continue their argument about whether or not to chase after Brainiac and the stolen Daily Planet building or to focus the fight on Earth itself. But before they can agree one way or the other, Brainiac's robots and exobytes attack the JLA watchtower, breaching the hull on several decks. The Justice League splits up to deal with each breach separately.

The exobytes take over Aquaman and begin digitally downloading his powers, but Superman manages to freeze him with his super breath before he dies. The robots manage to see through the Martian Manhunter's invisibility and download his powers as well.

In the future, Luthor and his team of surviving heroes and villains prepare their attack on Brainiac's mothership. Luthor, Atom and Black Canary approach the ship directly while the others prepare a ground assault to keep the enemy robots busy. Luthor intends to find a shrunken bottle city from the planet Korugar so he can find a Sinestro Corps ring and use it to finish off Brainiac.

Once the attack begins, Atom tries to shut down Brainiac's robots, which causes an explosion that takes his right arm completely off and destroys the remote device that Luthor gave him to shut down his armor.

Brainiac discovers that Luthor, Atom and Black Canary are on his mothership and prepares a counterattack.

Retrieved from "https://heykidscomics.fandom.com/wiki/DC_Universe_Online_Legends_Vol_1_4?oldid=1422156"
Community content is available under CC-BY-SA unless otherwise noted.