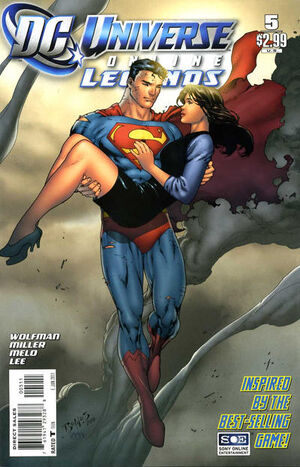 IN THE PRESENT Brainiac's exobytes continue to cut into the JLA Watchtower in space and find Aquaman still recovering from the attack last issue. Superman arrives just in time and uses his heat vision to take them all out. Aquaman insists he can fight, but Superman orders him into a water tank to finish recovering.

Superman contacts the other League members and warns that these exobytes can actually steal their powers, but the comm goes down. With a quick X-ray, Superman sees that Brainiac is taking out the power grid and that life support is going to shut down. In another part of the Watchtower, Brainiac's exobytes chase after Batman, but he outsmarts them and reaches the weapons room in time to take them out. He manages to reroute enough power to buy time for the rest of the league to escape.

While Luthor, Black Canary and Atom continue their assault on Brainiac's mothership, Luthor offers a backhanded apology for causing Atom's arm to be blown off by the explosion last issue. They find the chamber with Brainiac's bottled cities. Using Atom's shrinking power, they enter a city from Korugar and Luthor steals yellow Sinestro Corps rings from dead Corps members.

IN THE PRESENT AGAIN

Hawkman narrowly escapes the attacking exobytes and is rescued by Flash. The air runs out, but Firestorm rounds the corner just in time and expands his created air pocket to save their lives. Then Zatanna magically explodes more exobytes to save Superman and Plastic Man.

Batman orders the League to the teleporters and hopes that everyone is accounted for before the whole Watchtower explodes. Unfortunately Aquaman is still recovering in his water tank as the room around him begins to burn up.

Retrieved from "https://heykidscomics.fandom.com/wiki/DC_Universe_Online_Legends_Vol_1_5?oldid=1422157"
Community content is available under CC-BY-SA unless otherwise noted.