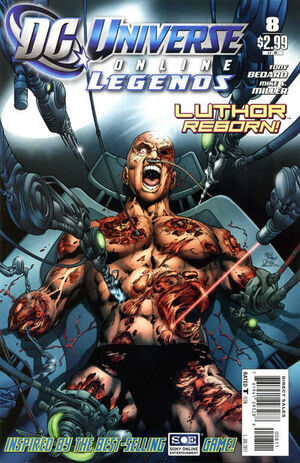 Perfect. I imagine they are frightened by the sight, but they will soon come to understand...that this is the new face of heroism.

We pick up right where the last issue ended. Superman just redirected what was left of the largest piece of the Justice League Watchtower that plummeted from Earth's orbit. It was set to hit the middle of Metropolis and Superman couldn't stop it, so he pushed it toward the city's industrial area where Brainiac had told Lex Luthor to hide from the blast. Thanks to Brainiac's subterfuge, Luthor believes that this is all Superman's fault. The blast did not kill Lex, but injured him greatly. He has been impaled with sharp metal debris, causing severe spinal damage and internal bleeding, and lost both his arms from approximately the elbow and both his legs. Superman is obviously completely unscathed and tells Luthor to lie still because he's in shock and hurt worse than he realizes, but Lex insists that he will have his revenge.

A helicopter arrives above and warns Superman to leave immediately or face prosecution, but Superman has better things to do anyway and takes off to find Brainiac.

At S.T.A.R. Labs, Batman tries to pinpoint Brainiac's location, and hopefully the missing Daily Planet building, but also worries about Martian Manhunter's injuries. It seems that J'onn has lost certain abilities to the exobytes, such as shape changing and his Martian Vision, but he still has flight and strength. Superman breezes in and promises that they'll find a way to reverse these effects, but Batman suggests they start by anticipating Brainiac's next target before more people are hurt.

FINALLY we return the story to the Daily Planet, which has been bottled up in Brainiac's ship. Lois can't seem to communicate outside and Perry White hopes they'll find some way out. Jimmy finds a pair of binoculars from Steve Lombard's desk, but Lois steals them away quickly and notices the adjacent bottles containing landmarks from other planets.

At Metropolis General Hospital, doctors get to work saving Lex Luthor's life, but Lex insists that he will not allow himself to be anesthetized for the procedure. His bodyguard threatens to shoot them if they try. But just then...

Luthor's body vanishes in a flash of light, causing his bodyguard to further threaten the doctors since no one has any idea where he could have disappeared to.

But Luthor is safe on Brainiac's ship, having been beamed there so robots can save his life and even augment his body. Brainiac explains that Luthor is an important part of his plan and that he needs him if Superman is ever going to be defeated. Unfortunately for Lex, the procedure is going to be incredibly painful. Not that it matters to Brainiac.

Batman contacts Oracle, who organizes teams of heroes across the globe to find Brainiac's next target. Flash runs through Continental Europe while Green Lantern checks in on Rio de Janeiro in Brazil. Superman flies over London as Firestorm covers Australia. The Great Ten protect China and the Rocket Reds look out for Russia while Martian Manhunter focuses on Northern Africa. But no one can find a trace of Brainiac or his exobytes.

On Brainiac's ship on the far side of the Moon, Lex's new enhancements are completed, but much to his chagrin, his body has been essentially mutilated in the process. He now appears to be wearing a permanent prototype of the suit he will have in the future scenes and game videos. Brainiac reminds him that this is all Superman's fault and that now, vengeance is in his grasp. Luthor refuses to believe that Brainiac gave him these gifts without drawbacks like microphones and cameras, but Brainiac insists that all this is necessary to take on someone as powerful as Superman.

At the Daily Planet building in the bottle, Lois uses the binoculars to see Lex Luthor approaching. He unhooks the bottle from its pedestal and studies it up close. Despite his scarred face and cybernetic body, he closes in to the glass and shows the inhabitants what he calls "the new face of heroism."

Retrieved from "https://heykidscomics.fandom.com/wiki/DC_Universe_Online_Legends_Vol_1_8?oldid=1422160"
Community content is available under CC-BY-SA unless otherwise noted.