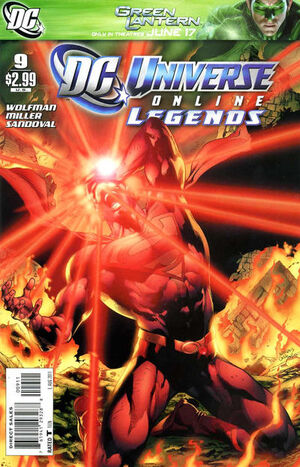 Appearing in "Anarchy at Arkham!"Edit

Synopsis for "Anarchy at Arkham!"Edit

Several issues ago, Lois and the entire Daily Planet building were whisked away from Earth, then shrunk and placed in a bottle on Brainiac's ship. In the present, Superman dreams that he's flying through space with Lois in a space suit; they share a wonderful romantic moment until her face swells up and her visor breaks. Clark wakes up in bed, certain that Lex Luthor knows her whereabouts.

As Superman, he flies to Luthor's office at the top of Lexcorp Tower and assaults the guards who fire at him; Mercy Graves soon arrives, commenting on the hundreds of millions in damage he's doing. Upon being questioned by Superman, she simply states that she hasn't seen him in a week. In a rare show of fury, Superman uses his heat vision to etch an "S" into the wall, aiming just inches over her head, before departing.

Luthor and Brainiac observe the action on a screen in Brainiac's ship; the former marvels at Superman's overflowing rage, while the latter comments that he needs the Kryptonian alive for his plan to be complete. Lex corrects him, suggesting they could use any Kryptonian.

Back in Metropolis, Supergirl evades bolts of electricity from Livewire, but eventually takes a hit to the back. Just when Supergirl has been disabled, Brainiac decides he no longer needs Livewire and uses his exobytes to dissolve her where she stands.

Later, Supergirl meets up with what's left of the Justice League and explains to Superman that he heard Brainiac's voice on the other end of Livewire's communication, but not Luthor. Green Lantern uses his ring to send out a message to other League members: if they see anything from Brainiac, Luthor, or the exobytes, they must contact him immediately.

Just then, Batman contacts Superman from his cave and says that Brainiac has just freed the inmates at Arkham Asylum, and he could use some help. They arrive quickly and fight Batman's villains while trying to ascertain more information, but none of them seem to know anything except that Brainiac had a hand in their release.

Unexpectedly, Luthor contacts Superman over his communicator and asks for help: Luthor was working with Brainiac, but changed his mind and escaped with the bottle containing the shrunken Daily Planet; he claims the robots are chasing him, and he needs assistance immediately. Superman takes off, but the League warns him that Brainiac is releasing tons of meta-human villains all over the world. Superman ignores them because he knows Lois is in the bottle with the Daily Planet.

Superman arrives at Luthor's location and quickly takes out all the robots, after which he threateningly demands the bottle. Mercy walks up with it, and Luthor pulls out an enlarger that he says he stole as well. While Superman watches the Daily Planet grow back to normal size, a special exobyte sneaks up behind him and bites into his neck. Before he can take a moment to think about it, the occupants of the building flood out of the front doors and Superman is finally reunited with Jimmy Olsen and Lois Lane. But before he can spend more than a few seconds with them, Batman contacts him and says that he is needed immediately.

As the two meet, Batman chews Superman out for leaving: Lois and the Daily Planet were not in any immediate danger, and in addition to the exobyte draining his powers, Superman's inaction has gotten the Martian Manhunter more seriously injured. Batman urges him to choose between saving his friends or saving the world.

Coping with his failure to save Metropolis and the loss of Lois and the Daily Planet, Superman makes a tactical mistake that could cost the JLA dearly. Plus, a new hero has emerged to save the day on Earth – and his name is Lex Luthor!

Retrieved from "https://heykidscomics.fandom.com/wiki/DC_Universe_Online_Legends_Vol_1_9?oldid=1422161"
Community content is available under CC-BY-SA unless otherwise noted.