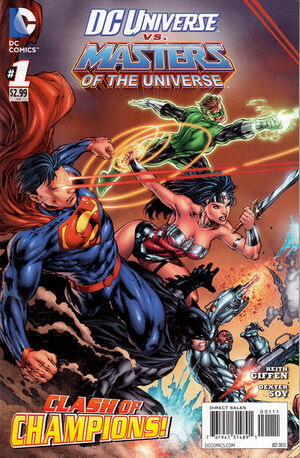 Publisher
DC Comics
Previous Issue
Next Issue
—
DC Universe vs. The Masters of the Universe #2

And this... Skeletor's come to harvest our essence for whatever 'nefarious reason--

Since Hordak's Horde drove the Masters of the Universe out of Castle Grayskull, they have been reduced to making small attacks on Horde forces outside of the capital city. Spotting a high-security iso-block, they defeat its guards and break in, hoping to find someone they can use as leverage to get their home back. Unfortunately, the one imprisoned inside is Evil-Lyn, whom they all find especially annoying. Despite that, they free her, and learn that she was being kept in the iso-block out of fear. She happens to know the whereabouts of Skeletor, and if she could contact him, it might shift the balance of power away from Hordak, who betrayed him.

Meanwhile, in Greenwich Village, Madame Xanadu receives a strange visitor. The woman has come to petition John Constantine for help. She must warn him that Skeletor walks the earth. Constantine happens to be present, and he is aware of the woman's identity, as she is a figure of myth that he is familiar with. She is Queen Marlena of Eternia.

In Salem, Massachusetts, Skeletor struggles to get Black Alice to cooperate with him. The angst-ridden teen is playing host to a greater being, who has recruited Skeletor to siphon this world's magic energy away. Only once this world has died can he return to Eternia. So, Skeletor is forced to tolerate Alice, for the time being.

Marlena relays that same information to John and Xanadu, explaining that while Eternia is known to be a great font of magic, replete with powerful mages, that magic is a fact of life for them. On Earth, there are so few mages that this planet's magic energy is practically untapped, making it a dangerous, near limitless weapon in the hands of one of Eternia's skilled mages. Despite having conceded that what Marlena says is true, John insists that she remain behind, and leave the issue to him and the Justice League Dark. In response, she forcibly introduces his face to some furniture. As he begins to admit defeat, everything goes dark, and they realize that something is going quite wrong.

Annoyed at having to hide away in the House of Secrets, Skeletor demands to know who the greatest threat to his plans might be. Alice responds that the Justice League are certainly that - almost as bad as the Masters of the Universe. She shows him images of the League in action, and explains their nature. Skeletor is concerned about whether it has any mystics in it, and Alice refers him instead to the Justice League Dark, run by John Constantine. This name is not unfamiliar to Skeletor. In fact, Constantine is no hero, if the stories he's heard are true. He considers that it might be a good idea to get John to join him, instead of Alice.

Meanwhile, Evil-Lyn is excited (in suspect ways) by the prospect of violating King Randor's pan-dimensional accord, which calls for no travel between dimensions from Eternia. With the possibility that Skeletor might become their ally in getting Eternia out of Hordak's grasp - as much as he may want to take it all for himself - the Masters of the Universe are seriously considering travelling to Earth to get him. Unfortunately, in order to home in on Skeletor's location, Evil-Lyn needs someone of her own blood - otherwise, she'd have done so much sooner. However, because someone of Prince Adam's blood is on this planet, she can use him to get there.

Before they can even fully understand what's going on, Evil-Lyn uses the spell to whisk He-Man and Teela away to Earth, where Adam is surprised to see his mother.

Retrieved from "https://heykidscomics.fandom.com/wiki/DC_Universe_vs._The_Masters_of_the_Universe_Vol_1_1?oldid=1422199"
Community content is available under CC-BY-SA unless otherwise noted.