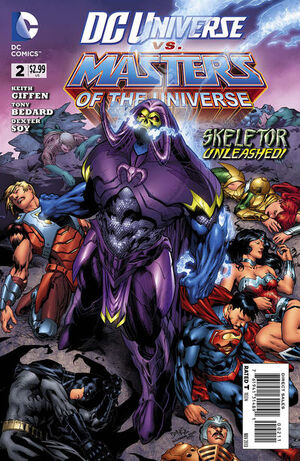 Skeletor is many things, but "boy" and "friend" are not among them.

Madame Xanadu's shop is under attack by evil magical projections, and John Constantine attempts in vain to prevent the monstrous rats from tearing he and his companions to pieces. Unfortunately, the magic that they were created from is not of this world - it is from Eternia. Evil-Lyn recognizes it, and helps by combining the magic of this world with the magic of hers, and together, she and John dispel the projections. While Evil-Lyn and He-Man are merely myths for John, he is a myth on their world. Even so, the threat of Skeletor, who has found his way to this Earth, is all too real.

He-Man, who has recently been reunited with his mother, Marlena, is curious as to what she is doing in this strange new world. She explains that she was born here. She had been an astronaut. Her ship crossed the dimensional veil, crash-landing on Eternia, where she met King Randor and fell in love. If Skeletor hadn't rewritten her memories and stranded her on her home-planet, she'd still be with Randor today. He-Man admits that his own memory was similarly wiped thanks to Skeletor's use of some kind of "Skull of Power". However, he had not come to Earth to find her. He and Teela joined forces with Evil-Lyn to retrieve Skeletor and use his power to defeat Hordak. Marlena warns that Skeletor will not be too happy to see Evil-Lyn, though. After all, he has taken up with a new woman: Black Alice. Not to mention that the pair are working together to drain the earth of its mystical life-force.

Elsewhere, on the Justice League Satellite, the Justice League is surprised to have their base intruded upon by Skeletor himself. Unfortunately for Superman, Skeletor is aware of the Kryptonian's weaknesses, and uses magic to attack. With the rest of the League's attention, Skeletor explains that he needs minions, and he feels they will do just fine.

Meanwhile, on Eternia, the remaining Masters of the Universe trace the origin of residual mystical readings to Evil-Lyn. This begs the question: did Prince Adam and Teela go with Evil-Lyn of their own volition, or were they tricked? With the aid of a Horde Dimensional Transponder, Man-At-Arms traces Evil-Lyn's energy signature to find out where the prince and his daughter were led.

John Constantine leads He-Man and company to the Batcave, hoping that Batman would be there to help them, but the caped crusader is absent. Suddenly, and incoming teleport brings Batman and one of Skeletor's evil monsters back to the cave, still locked in battle. Using his Power Sword, He-Man comes to Batman's rescue, though he is not so grateful for it. John admits that it was his plan to come see him in the Batcave, because lives are at stake, but they have little time to talk, as Superman appears, under the influence of Skeletor's magic. Though Batman attempts to get Kryptonite to protect himself, he and the others are all beaten out of the Batcave, and forced to contend with the rest of the League, who have also been tainted by magic.

The League focuses on capturing the magicians among their prey, but Skeletor has informed them that He-Man is their real threat, so Superman turns his attention to him. Fortunately, He-Man is strong enough to hold his own against Superman, for the time being - if only by sheer determination alone. That determination leads him to thrust his sword straight into Superman's chest, to everyone's horror. The magic that controlled the Justice League fades, as Superman collapses, and their horror increases when they realize that the Man of Steel is dead.

Retrieved from "https://heykidscomics.fandom.com/wiki/DC_Universe_vs._The_Masters_of_the_Universe_Vol_1_2?oldid=1422200"
Community content is available under CC-BY-SA unless otherwise noted.