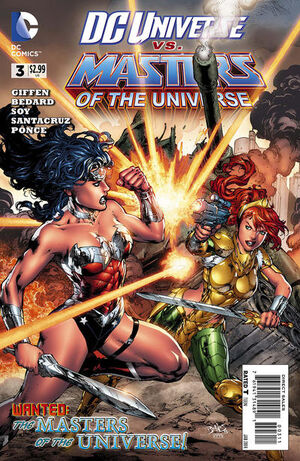 So what you're saying, Constantine, is that you expect us to help the people who killed Superman...?

After having been attacked by the Justice League while they were under the control of Skeletor, He-Man thrust the Power Sword through Superman's chest. Naturally, the Justice League - particularly Wonder Woman - is not happy. When Batman explains that these are his friends, and obviously not themselves, He-Man realizes that he should never have fought them to the death, and decides that it would be best to relinquish the Power Sword, and return to his normal self as Prince Adam. Teela warns that he shouldn't do it, as the League doesn't trust him, even as a powerless prince of Eternia. Regardless of Adam's wishes, Evil-Lyn uses her magic to transport she and her companions to safety.

They appear in Metropolis, and despite being far from Gotham, Madame Xanadu reminds that news of Superman's death will surely bring the whole world down on them. Annoyed, Adam complains that if they had been allowed to stay, he could have reasoned with the Justice League. Now, they'll be considered fugitives. Sternly, Evil-Lyn reminds that they don't have time to waste on reasoning, when Skeletor is siphoning away the planet's life force. John Constantine agrees that the sooner they get the Eternians back to Eternia, the better.

Back in Gotham, the League tries to comprehend what has just happened. Green Lantern can't seem to trace Evil-Lyn's magic with his ring, while Batman continues to try to explain that they ought to be seeking Skeletor instead. All the while, Wonder Woman cradles Superman's body in her arms, and is disturbed when it begins to emit a bright, crackling energy. Suddenly, his body seems to evaporate, leaving her arms empty. Batman warns that none of them are thinking clearly yet. Superman attacked the Batcave unprompted - very unlike him. The rest of the league disregards his warning, focusing instead on the capture of Superman's perceived murderers. Grimly, Batman orders them to get off of his lawn.

News of Superman's death begins to spread, and Skeletor is glad that his plan worked. He knew that He-Man's warrior's code would ill-serve him in another world. Now, the Justice League will waste its energies hunting He-Man down instead of trying to stop him from siphoning away the Earth's mystical life-force. No one can stop him.

On Eternia, the other Masters of the Universe attempt to find a way to cross dimensions by using the Evil Horde's technology. There is a risk, however, that if they do not find Teela and He-Man that they will not be able to come back. Without hesitation, they all pass through the portal and land unceremoniously in the midst of Greenwich Village, right in front of Madame Xanadu's shop. The public are not receptive to their sudden arrival, but Man-At-Arms manages to convince a teenage boy to explain that Earth's warriors are the Justice League.

At the House of Mystery, John Constantine has some difficulty in convincing the Justice League Dark to help the people who are rumoured to have killed Superman. Regardless of the Eternians' intentions, Frankenstein insists that they must find them.

Steve Trevor, meanwhile, is attempting to do just that with the help of the Justice League of America. They are surprised to receive an offer of help from Man-At-Arms and the Masters of the Universe. That offer of help is rejected outright, though, when Steve realizes that they are in league with He-Man.

In the House of Secrets, Black Alice wonders about whom Skeletor has allied himself with. This entity has promised to help him take back Eternia from Hordak, but Skeletor is sure he will try to take it for himself, given the opportunity. In saying so, the pair receive an unexpected visit from that "ally", who demands to know how much longer he must wait for the task he assigned to be completed. Skeletor insists that all is according to plan, and soon the Earth will crumble without its magic - but not before they have the pleasure of witnessing Earth's mightiest heroes slay the Masters of the Universe. Amused, the dark entity comments that the Masters of the Universe had always laughed at him before. Now, they would cower before the power of Dark Orko.

Retrieved from "https://heykidscomics.fandom.com/wiki/DC_Universe_vs._The_Masters_of_the_Universe_Vol_1_3?oldid=1422201"
Community content is available under CC-BY-SA unless otherwise noted.