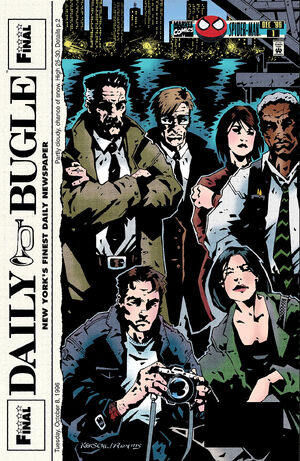 An informant has told Ben Urich to go to the Food Factory where he and Angela Yin see various mobsters enter. Once inside the mobsters talk about forming a crime cartel but recognise that Urich is from the Daily Bugle.[1] With his cover blown Urich races for the car screaming to Yin to start it so they can make a quick getaway.[2]
Back at the Bugle Charlie Snow is showing the offices to a tour group. Joe Robertson wants Betty Brant to do an interview with Tommy Fude, the owner of the food factory, while Ken Ellis gets a tip-off from a man who believes that aliens are entering the country illegally.[3]

Retrieved from "https://heykidscomics.fandom.com/wiki/Daily_Bugle_Vol_1_1?oldid=1481487"
Community content is available under CC-BY-SA unless otherwise noted.