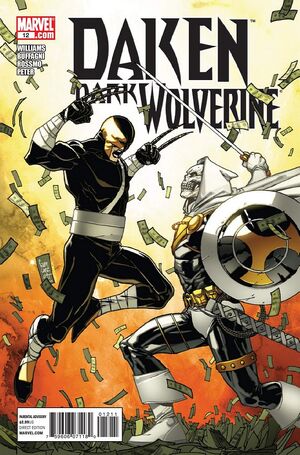 You know, even according to the ludicrous standards of super-people......you really do have the most laughable costume.

The conclusion of “BIG BREAK”! The biggest cash heist in American history is at Daken's fingertips but TASKMASTER is standing in his way. Meanwhile, FBI Agent Donna Kiel might just have uncovered the truth behind the grisly claw murders of Los Angeles' most terrifying serial killer.

Retrieved from "https://heykidscomics.fandom.com/wiki/Daken:_Dark_Wolverine_Vol_1_12?oldid=1531303"
Community content is available under CC-BY-SA unless otherwise noted.