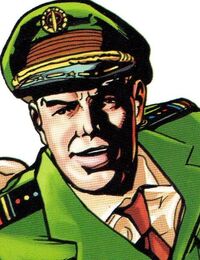 Dare was a Colonel in Spacefleet. He and his aide Digby were among the greatest defenders of the planet Earth, often against the forces of the Mekon and his Treens or lesser menaces such as Vora, Blasco and the High Lords of Saturnia. Dare's superior at Spacefleet was Sir Hubert Guest. Dare was also assisted by a number of resourceful allies including Sondar the Treen, "Red" Tharl, the Therons, Hank and Pierre, Lex O'Malley, Flamer Spry and Professor Jocelyn Peabody.

Dare was resurrected in 2000AD in 1977, in a revamped form which bore little resemblance to the original, the explanation being that he had been injured and spent decades in suspended animation. Another version of him was revived in the revamped Eagle in the 1980s, but was given a totally new origin as a time traveler from 1950. Further alternative versions included the embittered older Dare seen in the magazine Revolver and a version much like the 2000AD one which was published by Virgin Comics. The original Dare was revived for new adventures continuing directly from his Eagle run in Rod Barzilay's lavishly produced fanzine Spaceship Away.

Retrieved from "https://heykidscomics.fandom.com/wiki/Dan_Dare_(Eagle)?oldid=1549037"
Community content is available under CC-BY-SA unless otherwise noted.