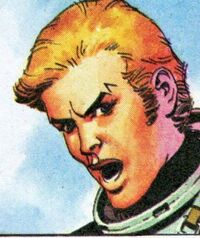 Daniel Dare was the descendant of the original Dan Dare. When his great-great-grandfather's old enemy the Mekon resurfaced, Daniel carried on in the family tradition as his newest nemesis. Eventually becoming a Galactic Marshal, for a time he led a squad of space commandos known as Dan Dare's Eagles, who operated out of the starship Britannia Eagle.

Daniel Dare was originally depicted with brown hair, like his predecessor, but later became fair-haired for no apparent reason.

This Dan Dare was drawn by Ian Kennedy.

Retrieved from "https://heykidscomics.fandom.com/wiki/Dan_Dare_II_(New_Eagle)?oldid=688565"
Community content is available under CC-BY-SA unless otherwise noted.