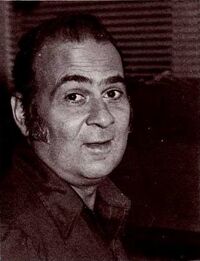 Danny Crespi was a long-time letterer who became Marvel's Art/Production Supervisor. He died of leukemia at age 59 in 1986 (supposedly having survived for eleven years with the disease).[1] Crespi was eulogized in the "Bullpen Bulletins" of December 1985 comics, as well as in The Comics Journal #101 (Aug. 1985)
His daughter is letterer and production manager Susan Crespi.

Crespi started his career in 1948 as a letterer, mostly for Marvel. He became an assistant production manager in 1969, and a production supervisor in 1978. He was known a "skilled craftsman, an expert on calligraphy, design, and production."[1]