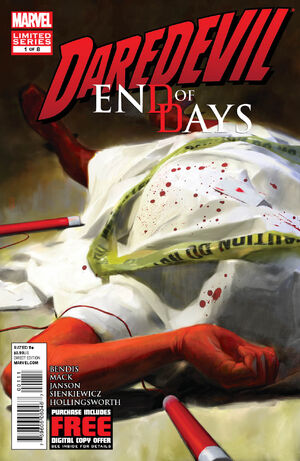 And for all the good Matt Murdock has done these people...All the lives he's saved...All that he gave of himself...End of the day...Hell's Kitchen just stood there and watched him die.

Hell's Kitchen, the near future. In a final battle with Bullseye that lasts over an hour and forty five minutes, Daredevil is brutally injured. Telling Daredevil he will miss him, Bullseye kills the Man Without Fear instantly by impaling him with one of his rods through the left side of his head. And Hell's Kitchen didn't care.

A few days later, the Daily Bugle is going out of business due to more demand for digital news media rather than print media. Ben Urich, lost in thought, is asked by again-Editor-in-Chief J. Jonah Jameson to publish an article on Matt Murdock's life story and final moments. But Urich has no intentions. He's done every story possible regarding superhero activity in New York. The Kree-Skrull War. Avengers Disassembled. The House of M. The Civil War. The Schism. The Baxter Building Murders. And in every one of those stories, people were ignorant and indifferent to it.

But one man is different. He saw Daredevil dying, and his wife recorded it with her video camera (so that she could sell it). He actually is a big fan of Urich and his work, and believes Daredevil should be a historic figure. The man shows Urich the footage of the fight, and then reveals something no one else has reported - Daredevil's last word, "Mapone". The two discuss for a little bit on what that might mean before Urich leaves. His adopted son Timothy asks at dinner if he can see the body, as Daredevil was his hero - a hero no one at school knows.

Urich later sets down to write the story about Daredevil. Scrapping an idea about his relationship with Murdock, he begins with his origin story, including how he got his powers, Battlin' Jack's death, and the birth of a warrior, Daredevil. Throughout this, he fumbles constantly on what exactly to write. He then goes into Daredevil's rivalry with Kingpin, and a new story is revealed. After leaving America, Kingpin returned to the US in order to become a citizen again, and found an attorney to help him reintegrate via court. As the two had dinner, though, Daredevil appeared and viciously told Kingpin to get out of the city or he will kill him. The attorney gets in Daredevil's face, but Kingpin indeed starts fighting Daredevil. The fight continued onto the street and ended with Daredevil beating Fisk over the head constantly with his rod, killing him. And heroes don't kill.

Urich can't write beyond that. He stops there, deletes the draft and walks out onto the street, muttering to himself. He finally curses Murdock and says he will write his story. And unbeknownst to him, someone who looks just like Daredevil appears on a rooftop.

• In the near future, investigative reporter Ben Urich has one last story to write – what was Matt Murdock’s the final secret? • A story years in the making brought to you by some of the greatest creators in Daredevil history!

Retrieved from "https://heykidscomics.fandom.com/wiki/Daredevil:_End_of_Days_Vol_1_1?oldid=1421588"
Community content is available under CC-BY-SA unless otherwise noted.