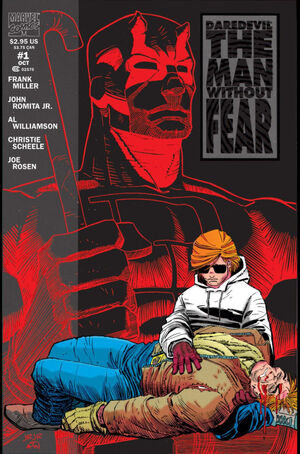 So you're out of kindergarten. Don't get cocky.

Matt Murdock grows up in Hell's Kitchen. A police officer is lecturing a number of the children in the neighborhood because they were using a fire hydrant to cool down. Matt, wearing a mask, rides by on his skateboard and steals the cop’s nightstick. He hides it in the gym his father, “Battlin’” Jack Murdock, trains in. His father is a boxer, but tonight he is alone. He is holding a photograph crying over a woman named Maggie. Matt helps him to bed. At the gym Jack is being beaten up by Slade. The Fixer is trying to offer him a job as an enforcer, but Jack refuses. Jack tells them they can kill he, but he won’t work for them. Fixer tells him he won’t only kill Jack, but he will kill his don Matt as well. Matt continues to box, but when he isn't in the ring, he is collecting for the Fixer. Jack wants his son to study and make something out of himself, not to be anything like him. Matt comes home from school one afternoon proud of himself. A boy was picking on him and he stood up for himself and fought back. Jack is upset and hits Matt. This sends Matt down a path to learn the rules and laws. To see people help accountable for their actions. Matt spends his time studying. When he is picked on at school, he just stands there and takes it. Though he doesn't fight, he spends the time he isn't studying at the gym training. On a picture perfect day, Matt sees the last thing he will ever see. A blind man is crossing the street and there is a truck heading straight for him. In a second Matt reacts and jumps to push the man out of the way. The truck swerves and the barrels in the back crash to the street, spilling the contents into Matt’s eyes. Matt is rushed to the hospital in so much pain. Eventually the pain goes away, but he is blind. The rest of his senses are heightened to superhuman levels. He is visited by a nun while in the hospital. Back at home he overhears his father talking with representatives from the company whose chemicals ended up into Matt’s eyes. They threaten him with exposing his connection with the Fixer. Matt is pitied by all except for one, Stick. Stick, who is also blind begins to train Matt on how to use his other senses. Matt excels and begins to be able to do things he couldn't do when he could see. Jack is jogging, training for his next fight. He is stopped by the Fixer. The Fixer tells him that he hadn't earned any of his knockouts. That he had been fixing his fights for a while now. Setting him up for a big fall. He wants Jack to take a dive in his next fight so that he can make a bundle. During the fight Jack is in his corner and one of the Fixer’s men comes up to him and tells him to take a fall. He decides he’s not going to and Jack knocks out his opponent. He knows his son is watching and he wants to show him to never quit. Jack walks out of the arena into an alley. Waiting for him is Fixer and a number of his men. They beat Jack to within an inch of his life. He is bloodied and toothless, but he still offers up a smile. Fixer puts his gun in Jack’s mouth and pulls the trigger.

Retrieved from "https://heykidscomics.fandom.com/wiki/Daredevil:_The_Man_Without_Fear_Vol_1_1?oldid=1421606"
Community content is available under CC-BY-SA unless otherwise noted.