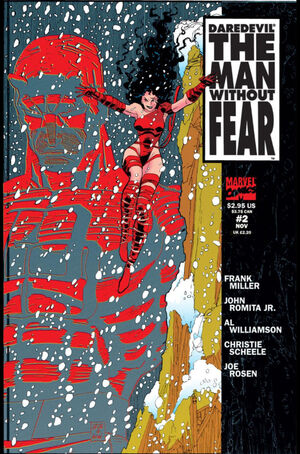 Foggy's snoring could raise the dead

Matt must identify the body of his father. He is able to get the scents of the killers. McHale and Gillian are drunk walking the streets. Matt taunts them and lures them into a dark alley. An hour later a cop is standing over their beaten and bloody bodies. One of them mumbles to the cop that they were attacked by Jack Murdock, but that they had killed him.

Next, Marcello and Slade are at the gym. Slade is training, hitting the heavy bag. The lights go out and Slade tries to find Marcello. He trips over his body, beaten on the floor. A spotlight shines down in the middle of the boxing ring and Matt Murdock is standing there with a mask on. He tosses his bat aside and Slade steps into the ring. Slade towers over him, but Matt takes out his knee and, with a roll of pennies in his hand, punches him in the face continuously. Slade is out. The door opens and Fixer sees what is happening. He makes a run for it, telling his driver Angelo to get them out of there. Matt follows the car from the rooftops.

Matt jumps on top of the car, and the car crashes. Fixer jumps out and runs into the subway. Matt follows him. Fixer has his gun out and pointed at Matt, but Matt just keeps walking towards him. Matt can hear the Fixer’s heart. It’s pounding and fluttering, and then it stops. Fixer is dead and Angelo is the only one left.

Matt tracks Angelo to a brothel. Matt jumps through the window and onto Angelo. Matt is attacked by a number of the women there. Matt thrashes trying to get free and one of the women goes flying out of the window to her death. Matt runs of horrified at what he had just done. He runs back to the gym yelling for Stick, but Stick isn’t there. Stick is a few blocks away talking with Stone. He tells Stone that after the nights events Matt has failed and is of no use to them.

One year later Matt is attending Columbia University. He is consoling his roommate and friend Franklin “Foggy” Nelson, who has been picked on by another student named Brad. The next night Brad is found naked and tied up on the tennis courts with a warning to leave Foggy alone. The next morning Brad apologizes to Foggy for the way he had been acting. A girl named Cathy hits on Matt, but he will have nothing of it and walks off to class.

Later that night, after Foggy has fallen asleep, Matt gets dressed and takes to the rooftops. He is running wild up there, dancing with the night. Suddenly he catches a scent of a woman up there with him. She takes off and he chases. He follows her through the park. She has left articles of clothing as a trail. The cops arrive and detain him. He remembers the woman who fell to her death and decides to follow the rules and not run. They see no girl and realize that he is blind. Elektra is getting dress, watching on and smiling. The cops tell him it was dumb of him to be walking through the park at that time of night alone.

The next day Matt is walking with Foggy. Elektra pulls up in her car and without a word from either her or Matt, he jumps into the car leaving Foggy behind, who is upset that she almost ran them over. She’s driving like a maniac and Matt likes it. It makes him feel alive. She stops and they get out. They are standing at the edge of a cliff. She tells Matt that they are two of a kind, different from everyone else. They live on the brink, drawn to the edge, and sometimes over. She leans back over the cliff and Matt is again reminded of the woman who he knocked to her death.

Retrieved from "https://heykidscomics.fandom.com/wiki/Daredevil:_The_Man_Without_Fear_Vol_1_2?oldid=1421607"
Community content is available under CC-BY-SA unless otherwise noted.