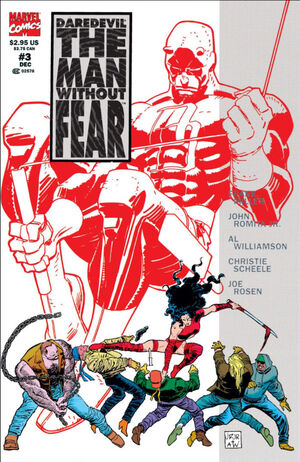 Not that I'm counting, pal, but you said one minute, not twenty. What the devil could Matt be doing in there?

Elektra is falling from the cliff. She crashes through the ice and into the water. Matt jumps in after her. He is trying to find her underwater, but cannot. He rushes to the surface to get a breath. As he does he can hear Elektra laughing as she speeds away in her car. Matt gets home, drenched and pissed. Foggy tells him where she lives.

Matt show up at Elektra’s mansion. There is a party going on and security is tight. Matt manages to sneak through the grounds and gets into Elektra’s room. He feels all of her first place trophies for swimming, track, aikido, kendo, karate… Matt starts down the hall and a dog charges him. He kicks the dog and then kicks a guard through the window. Beneath the window is a room of glass where the party is being help. Elektra is playing the piano. The guard crashes through the glass ceiling and right onto the piano. Elektra never stops playing. The guards take aim and fire up at the window where Matt is standing. He takes off running. Matt is upset with himself for breaking the rules again. Matt is shot as he makes his mistake.

Matt is back at his apartment. He is cleaning up his gunshot wound blocking out his senses to keep conscious. When he stops the bleeding and lets the world back in, he realizes he isn’t alone, and it isn’t Foggy. Foggy is at the door locked out. Matt says to give him a minute. Twenty minutes later Foggy is sitting at the door and Elektra walks out. Foggy walks in and the place is a mess and Matt is sitting on the floor with a smile on his face.

Elektra is in the city. She sees a group of 5 gangbangers who she overhears them bragging about what they've done to innocent women. She lures them into a dark alley. The block off the way out and she begins to undress. She promises not to scream. Two of them go to hold her while another pulls out a knife to cut off what little clothes she has left on. She kicks him in his junk and knees him in the jaw, snapping a vertebrae and killing him instantly. The others attack but eventually she kills all of them.

Elektra and Matt are training together, falling more and more in love. Matt can’t even concentrate in class. One night Stick wakes Matt up and threatens him. Tells Matt to stay away from Elektra, that she is dangerous. Matt doesn't listen though. Unfortunately, not long after, Elektra's father is killed and she must leave Matt. He doesn't understand, he only knows his heart is broken.

Don Rigoletto is meeting with his men. They are complaining that they are being out competed. Rigoletto refuses to murder children, or cater to unholy perversions, nor will they flood their streets with crack cocaine. He is upset and sends his men away. Wilson Fisk comes up behind him and begins to give him a massage as Rigoletto tries to relax. Kingpin then snaps his neck and takes his place ready to become the Kingpin of the city.

Retrieved from "https://heykidscomics.fandom.com/wiki/Daredevil:_The_Man_Without_Fear_Vol_1_3?oldid=1421608"
Community content is available under CC-BY-SA unless otherwise noted.