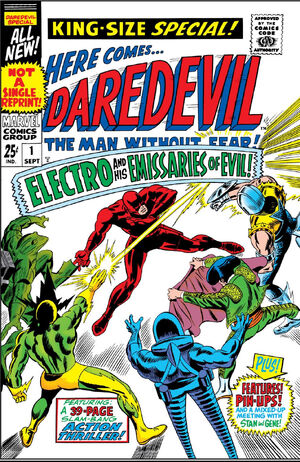 We're going to tear into him all at once!

Appearing in "Electro, and His Emissaries of Evil"Edit

Synopsis for "Electro, and His Emissaries of Evil"Edit

As Daredevil prowls the city after a training session he runs into a meeting of his old foes Electro and the Matador. After a brief battle the two crooks get away and Daredevil resumes his patrol little knowing that Electro is gathering together the Matador, Gladiator, Stilt-Man and Leap Frog to get revenge on Daredevil as the Emissaries of Evil.

After battling each crook individually, they regroup and take on Daredevil together, however the group's lack of teamwork and each member's desire to be the one to finally kill Daredevil causes them to lose their battle and Daredevil captures them all and turns them over to the police.

An inside look at the world of Daredevil, this story features a look into Daredevil's powers, and an explanation of his identities as Matt and Mike Murdock and how he maintains these identities to fool his co-workers.

Appearing in "A Colorful Collection of D.D.'s Cast of Characters"Edit

Synopsis for "A Colorful Collection of D.D.'s Cast of Characters"Edit

Features some of DD's rogue gallery, the Gladiator, Leap Frog, Owl and the Masked Marauder.

Appearing in "Blueprint for a Billy Club"Edit

Synopsis for "Blueprint for a Billy Club"Edit

A diagram and description of Daredevil's favorite weapon and how it works.

Appearing in "At the Stroke of Midnight!"Edit

Synopsis for "At the Stroke of Midnight!"Edit

A humorous and zany story conference between Stan Lee and Gene Colan.

Retrieved from "https://heykidscomics.fandom.com/wiki/Daredevil_Annual_Vol_1_1?oldid=1420347"
Community content is available under CC-BY-SA unless otherwise noted.