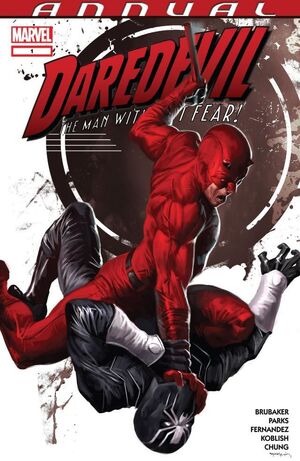 Appearing in "Devil May Care"Edit

Synopsis for "Devil May Care"Edit

The Black Tarantula is released from prison and is trying to go straight. To find honest employment, he asks to assist Matt Murdock. Murdock employs him as "security" but soon has him fighting the underworld of Hell's Kitchen as the costumed Black Tarantula. As he himslef is poverty stricken, Tarantula is tempted by the amount of underworld money that he sees. He eventually takes the money over Daredevil's wishes. When DD intervenes, Tarantula punches him senseless. He informs him that he is taking the underworld money to do good with it and exits.

Retrieved from "https://heykidscomics.fandom.com/wiki/Daredevil_Annual_Vol_2_1?oldid=1430509"
Community content is available under CC-BY-SA unless otherwise noted.