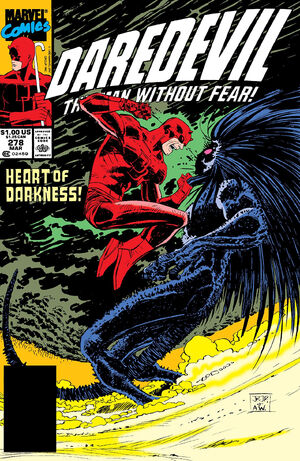 Many are the good men who can resist murder, theft, and cruelty. But a touch of greed? A bit of laziness? These are the seeds of the ruination that can bring down the best of men!

Appearing in "The Deadly Seven"Edit

Synopsis for "The Deadly Seven"Edit

Blackheart and Mephisto, in hell, discuss the finer points of evil, while in a cabin at a ranch in upstate New York, Brandy Ash, Gorgon, Karnak, Number Nine, Daredevil, and another man, say goodbye to each other. The Inhumans, Gorgon and Karnak, are on a search for their leader Black Bolt's child, and Gorgon offers to take Number Nine with them to Pottersville, being very friendly towards her, against Karnak's objections. Brandy becomes jealous; she bursts out that Number Nine can't go with them, and Daredevil interferes to try to reason with her, exhibiting a superior, smug attitude. The demons finish their discussion, with Mephisto telling Blackheart that it is not the blunt, unrefined evil of making a bad man do bad that brings true joy, but the evil of using a good man's weaknesses to turn him evil that is true, pure evil; this evil, Mephisto says, becomes high art. He then gives Blackheart the task of making Daredevil and the others on the ranch do evil.

Back on the ranch, Daredevil and Brandy decide to go after Number Nine and the Inhumans and make up with them, as Blackheart takes on the form of a man and pretends to be a hitchhiker. Number Nine flirts with Gorgon and convinces him to take the hitchhiker, while Karnak is resentful of the amount of attention she pays to Gorgon. Blackheart, in the guise of the hitchhiker, further deepens this resentment by talking about how the two are perfect for each other, and must be in love.

On the road with Daredevil and Brandy, the two discuss Daredevil's plans for his future. Daredevil reveals that he longs to be back in New York, fighting crime. They then come upon tire tracks, and then the jeep taken by Number Nine and the Inhumans, smashes into a fence on the side of the road. They get out of their car and run towards noises that they hear in the woods, only to find Gorgon and Karnak fighting each other, with Karnak telling Gorgon that he is no longer acting like an Inhuman, and Gorgon saying that Karnak is just jealous. Daredevil smells something, and feels the same sense of revulsion that he felt the previous month while heading upstate, and chases off after it. He comes upon Blackheart, in his human form, and begins beating him until he takes on his true form and tells Daredevil that Daredevil is just the same as him. This infuriates Daredevil, and he begins to punch at Blackheart who stands immovable for some time until Daredevil, his fist smashed and bloody, find himself beating the hitchhiker; Daredevil is confused, and goes back to the others, where Brandy calls him a coward. Number Nine defends him, and the Inhumans are confused as to why they were fighting. Meanwhile, Mephisto, in hell, watches all, and muses that his seed, as well as the others that he has planted, is doing well.

Retrieved from "https://heykidscomics.fandom.com/wiki/Daredevil_Vol_1_278?oldid=779800"
Community content is available under CC-BY-SA unless otherwise noted.