Start a Wiki
Part of the 'Fall from Grace' story arc 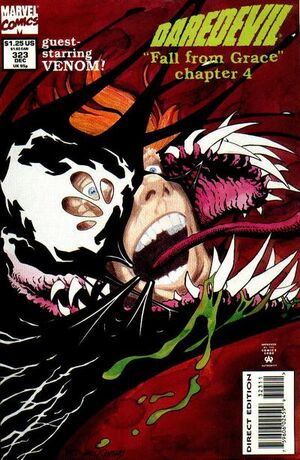 A Flashback shows Harry Kenkoy proving his worth to Lord Lord Daito (Appears in flashback and main story), Bisento, and Tekagi, earning him membership into The Snakeroot Cult (Appears in flashback and main story) and the codename "Budo". Present day: Siege and Daredevil prevent The Hand ninjas from retrieving Bisento. Bisento informs them that Snakeroot has used the bio virus to create Erynys. Venom kidnaps Bisento but Bisento refuses to tell him where the virus is. Daredevil convinces Venom that he doesn't need the virus and therefore Bisento, so Venom retreats, leaving Bisento. Bisento reveals to them Snakeroot's hideout and that Erynys is the embodiment of {{|Elektra}}. Then, immediately what appears to be Elektra attacks Bisento, exposing herself to them.

Meanwhile at the Snakeroot HQ, Budo and his associates try to get Eddie Passim to reveal the location of the virus.

Retrieved from "https://heykidscomics.fandom.com/wiki/Daredevil_Vol_1_323?oldid=1420700"
Community content is available under CC-BY-SA unless otherwise noted.