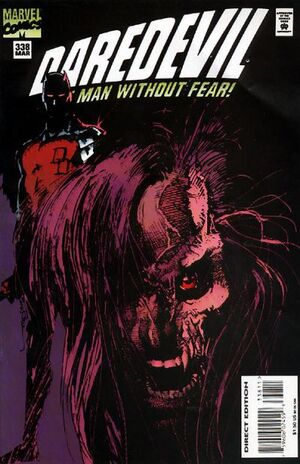 It's a typical day for Daredevil in his new identity as street hustler Jack Batlin. He cheats a guy at three-card monte to take his gun. For this actions, a local mobster starts takes an interest in Jack.

The Kingpin is working slowly to rebuild his empire from the ground up. Karen Page confronts her former producers about with kids pornography clip she found on one of their computer disks. And somewhere, a man named Victor Krueller dreams of hurting some of Daredevil's friends.

Retrieved from "https://heykidscomics.fandom.com/wiki/Daredevil_Vol_1_338?oldid=1683680"
Community content is available under CC-BY-SA unless otherwise noted.