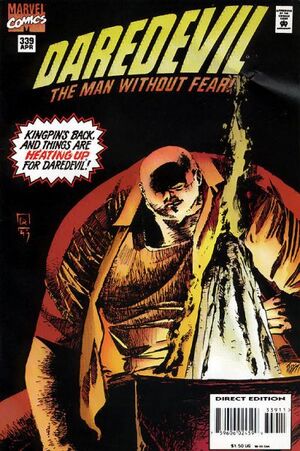 Victor "Kruel" Krueller attacks Ben Urich and his wife Doris. The attack makes them both remember a shared trauma. Years ago, Krueller was being chased by Wilson Fisk. He'd made the mistake of double-crossing the future Kingpin of Crime. The chase ended at a small diner where Ben was eating. Krueller has forgotten exactly who tried to kill him, but beating witnesses to that event help him remember.

Retrieved from "https://heykidscomics.fandom.com/wiki/Daredevil_Vol_1_339?oldid=1684602"
Community content is available under CC-BY-SA unless otherwise noted.