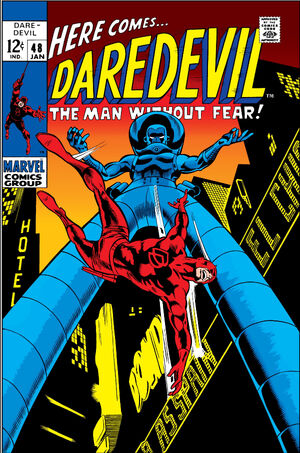 Appearing in "Farewell to Foggy!"Edit

Synopsis for "Farewell to Foggy!"Edit

In this issue, Foggy Nelson wins the District Attorney race in a "landslide". This will temporarily close the Nelson and Murdock Law Office. Murdock and Karen Page are both shown later at the old law office building. Page will become Nelson's secretary for some time in the District Attorney's office.

Nelson will later be defeated for District Attorney. He and Murdock then team again in private practice: First, in the "Storefront Legal Services" [4] and later re-form "Nelson and Mudock" as a private practice.

Retrieved from "https://heykidscomics.fandom.com/wiki/Daredevil_Vol_1_48?oldid=1719509"
Community content is available under CC-BY-SA unless otherwise noted.