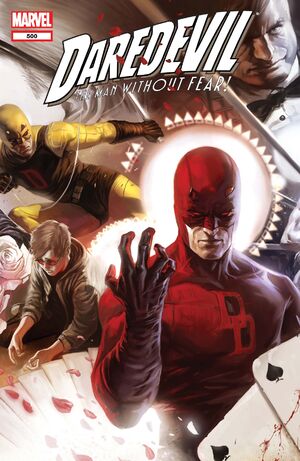 Appearing in "The Return of the King, Conclusion"Edit

This is it! The 500th issue of DAREDEVIL! What is the Kingpin's true plan? What do he and Lady Bullseye have in common? What will Matt Murdock do to make things right again? And just how will Ed Brubaker and Michael Lark leave this story for the next creative team to pick it up? Don’t miss the twists and surprises that will have everybody talking! An all-star anniversary issue featuring new stories by Ann Nocenti, David Aja, and others!

Retrieved from "https://heykidscomics.fandom.com/wiki/Daredevil_Vol_1_500?oldid=1730281"
Community content is available under CC-BY-SA unless otherwise noted.