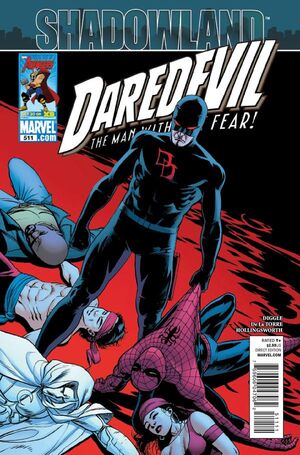 Hell's Kitchen has exploded into rioting, looting, and all-out chaos, and Daredevil is responsible for it all. As the leader of the Hand and controller of Hell's Kitchen, Matt Murdock knows that conquest of New York is within his grasp. But one of his oldest friends, though, goes to Shadowland to make one last ATTEMPT to save the Man Without Fear from walking the path from which there is no turning back.

Retrieved from "https://heykidscomics.fandom.com/wiki/Daredevil_Vol_1_511?oldid=1731026"
Community content is available under CC-BY-SA unless otherwise noted.