Part of the 'Without Fear' story arc 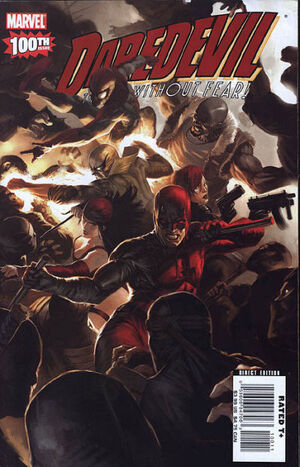 Appearing in "Without Fear Part One"Edit

Synopsis for "Without Fear Part One"Edit

DD confronts Larry Cranston aka Mr. Fear and learns that Larry personally knows Milla and is responsible for her current condition. After Mr. Fear uses a special gas he designed to affect DD's heightened senses, DD is thrown out of the building and is sent on a crazy trip through New York as he faces friends and foes from his past, unaware of the dangers lurking around him such as police willing to arrest him or gangs who have been ordered to attack him. When Daredevil is able to regain control of himself he goes back to Mr. Fear's hideout only to find someone tied up with a bomb forcing to flee and realizing that Mr. Fear has learned to cover his tracks. Matt heads home and he learns from Foggy that his wife has been arrested for murder.

Retrieved from "https://heykidscomics.fandom.com/wiki/Daredevil_Vol_2_100?oldid=1730492"
Community content is available under CC-BY-SA unless otherwise noted.