Start a Wiki
Part of the 'Without Fear' story arc 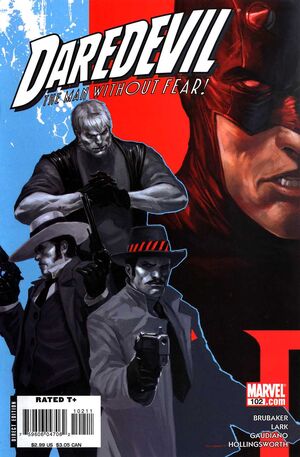 Appearing in "Without Fear part 3"Edit

Synopsis for "Without Fear part 3"Edit

While dealing with getting Milla released from the mental institution as well as locating Mr. Fear, Daredevil learns of a brawl between Mr. Fear's followers the Enforcers and the Wrecker and Razorfist who represent The Hood. During the battle Fancy Dan is injured before Daredevil arrives. But despite his attempt to intervene to catch the Enforcers and prevent any damage to the city, the Enforcers escape while DD fights off the two supervillains. After the Wrecker defeats DD by knocking a wall on top of him which he escapes by going into the sewers, Matt learns a female nurse from the psych ward is assigned to his house to monitor Milla's actions.

Retrieved from "https://heykidscomics.fandom.com/wiki/Daredevil_Vol_2_102?oldid=1420873"
Community content is available under CC-BY-SA unless otherwise noted.