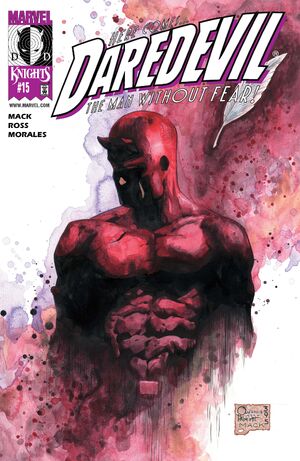 Though Echo had figured out Daredevil's weakness from their last encounter and exploits it by having them fight in a place where Daredevil's heightened senses would be useless, despite having the upper hand, she is stunned that Daredevil and Matt Murdock are the same person. Maya learns from Matt that Kingpin set her up as he was the real killer of her father (due to Matt being in grade school at the time of the murder); Maya takes drastically blinding measures in her revenge against Fisk.

Retrieved from "https://heykidscomics.fandom.com/wiki/Daredevil_Vol_2_15?oldid=1420786"
Community content is available under CC-BY-SA unless otherwise noted.