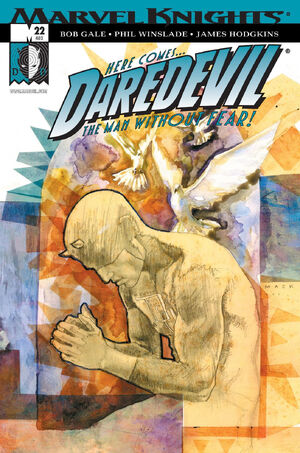 I'm gonna talk to my lawyer, and obviously, she wants to talk to me.

Appearing in "Playing to the Camera part three: Legal Questions"Edit

Synopsis for "Playing to the Camera part three: Legal Questions"Edit

Matt Murdock is hired by Samuel Griggs to sue Daredevil. Now Daredevil has to find a lawyer to defend him in court, and Kate Vinokur takes on the job.

Retrieved from "https://heykidscomics.fandom.com/wiki/Daredevil_Vol_2_22?oldid=1420793"
Community content is available under CC-BY-SA unless otherwise noted.