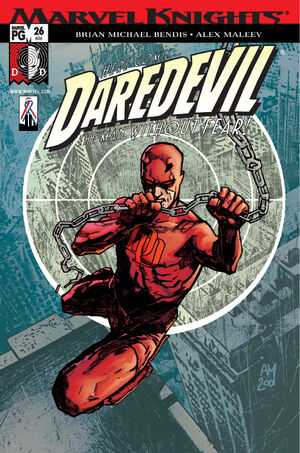 Because if you knew the story -- the story of Julius Caesar -- this thing I have for you now -- it really would have knocked your socks off.

Today: Kingpin's new man and a group of his lieutenants stab him Julius Caesar style and leave him for dead; One Week Ago: Matt and Foggy are leaving court when Nitro shows up and tries to blast Murdock.

Retrieved from "https://heykidscomics.fandom.com/wiki/Daredevil_Vol_2_26?oldid=1516986"
Community content is available under CC-BY-SA unless otherwise noted.