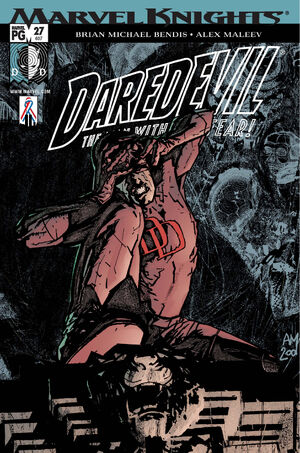 One Week Ago: A rookie cop tries to bust DD for assaulting a hood while he is trying to find out who sent Nitro after him; DD confronts the Kingpin about the situation and Fisk denies he had anything to do with it; Three Weeks Ago: Sammy Silke moves into town and starts making friends with the Kingpin's boys; Today: Ben Urich gets the call that the Kingpin is dead.

Retrieved from "https://heykidscomics.fandom.com/wiki/Daredevil_Vol_2_27?oldid=1420798"
Community content is available under CC-BY-SA unless otherwise noted.