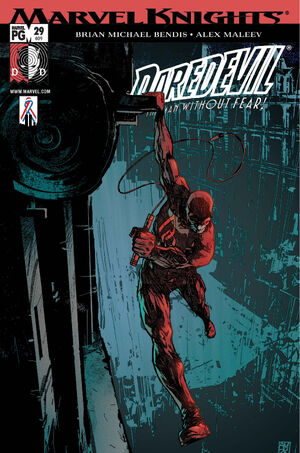 Today: Vanessa Fisk finds out her husband has been stabbed and in critical condition (and not killed as reports claim); Three Months Ago: Sammy joins the Kingpin's organization and asks for Murdock to be killed as a favor to his father; Kingpin forcefully declines; Two Days Ago: DD is told that the Kingpin has put the hit on him, and Wilson realizes that someone in his organization defied him to do it; Two Months Ago: Sammy regales the Kingpin's men with the story of a man who waited patiently until he got his shot and then took it.

Retrieved from "https://heykidscomics.fandom.com/wiki/Daredevil_Vol_2_29?oldid=1420800"
Community content is available under CC-BY-SA unless otherwise noted.