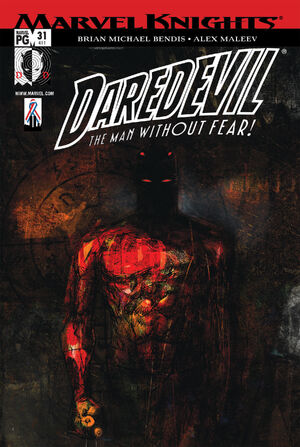 Believing the Kingpin to be dead Sammy Silke, Richard Fisk and others raise their glasses in victory. Meanwhile Vanessa Fisk has returned from Switzerland and she has some cleaning up to do. Under her orders, the mutineers that betrayed the Kingpin are killed, and she confronts her son Richard, who she shoots dead. Silke, who was the only survivor from the attacks wants to get into protective custody by the F.B.I., but when they refuse to protect him unless he exposes his father's illegal operations, Silke is able to offer then the next best thing and tells them what Richard told him that the blind attorney Matt Murdock is actually the superhero Daredevil.

Retrieved from "https://heykidscomics.fandom.com/wiki/Daredevil_Vol_2_31?oldid=1420802"
Community content is available under CC-BY-SA unless otherwise noted.