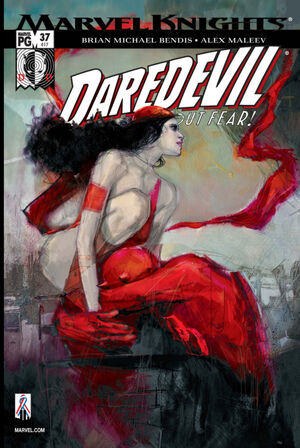 Appearing in "Dancing Between the Raindrops"Edit

Synopsis for "Dancing Between the Raindrops"Edit

Matt has a little rooftop chat with Elektra; The Daily Globe lawyer bluntly assures Matt and Foggy that the secret identity trial is going to court; DD spooks the FBI Agent who is going to testify and Mr. Rosenthal calls Matt in to settle; After a settlement is reached, Rosenthal decides to take the battle to court anyway since Matt is so smug about it all.

Retrieved from "https://heykidscomics.fandom.com/wiki/Daredevil_Vol_2_37?oldid=1420808"
Community content is available under CC-BY-SA unless otherwise noted.