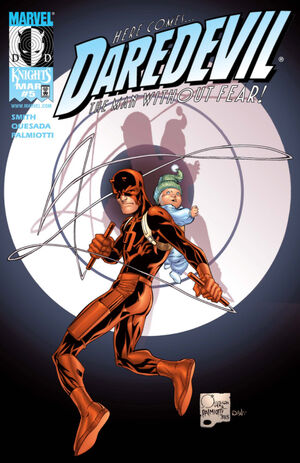 Suspecting that Macabes might be deceiving him, Daredevil goes to see Doctor Strange to get some information on the Messiah. While there he learns the cross that Macabes gave him is loaded with a drug Doctor Strange identifies as being devoid of smell and taste and is a type that causes DD to go violent whenever someone questions the child's innocence, forcing Doctor Strange to magically cure DD before he can attack him. Doctor Strange opens a magical link to Mephisto to gather information on the Christian redeemer. After Mephisto reveals that actual legend is different from what has been happening and his hints reveal the church is being attacked, DD realizing his mother and everyone there are in danger quickly departs. However, after arriving at the church, DD finds the perpetrator is Bullseye. Despite his best efforts, DD is outmatched and eventually Bullseye gets the child despite Karen's best efforts to stop him. Just as Bullseye throws Daredevil's Billy Club in his direction, Karen steps in the way to save DD and dies as a result.

Retrieved from "https://heykidscomics.fandom.com/wiki/Daredevil_Vol_2_5?oldid=1420775"
Community content is available under CC-BY-SA unless otherwise noted.