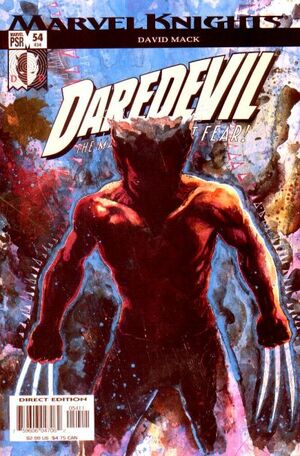 With a man shaped in the form of a wolverine staring at her, Maya at first couldn’t move, even if she wanted. There is a figure standing right in front of her. She couldn’t see the man’s face, but in the split-second freeze frame of the lightning, it didn’t look like something she was comfortable with. The vibration of the thunder catches Maya off guard again and sends a jolt through her spine. The rain is like a jazz rhythm on her head. She summons all her strength and stands up to face the figure before her.

Maya thinks that, if the man is speaking to her, it’s too dark for her to even know that for certain. When she stands, she realizes that the figure is shorter than her. She can see his breath and nothing more. The rain goes harder on her head. And the lightning finally shows Maya the man’s face. It’s Wolverine. He reminds Maya of the two dogs that were fighting earlier. After that, everything goes dark again. And the thunder hits Maya’s body like a drumbeat. And her instinct kicks in. She doesn’t hear the thunder, but feels it like an impact.

So, at first, Maya thinks that Wolverine hits her. She fights back, but Logan blocks all of her kicks and punches. Maya feels like she puts something in motion that shouldn’t be there. Like she’s going down a hill with no breaks, and a blindfold on. She remembers asking the question what darkness sounds like. While Wolverine and Maya continue to fight, the lightning goes again and again. It frames them both in flashbulb snapshots. And after each stop-motion, there’s a strobe of light. The drumbeat is there, to hit Maya in the darkness.

Wolverine doesn’t stop fighting. Maya sees him like a Picasso bull, running in all directions at once. She plays the bullfighter. Maya uses the moves she absorbed from Daredevil and Bullseye, and every combat technique in her arsenal to stay ahead of Logan. She decides to go for the nerve centers to incapacitate him. But that just makes Wolverine happy and Maya can see him roar, but doesn’t hear it. The rest is like a dream. During the long battle, she remembers the two dogs fighting. She remembers the vision quest legends of animals transforming into human shape and those images are running through her mind.

The thunder punches in her brain and she doesn’t see what it is that Wolverine does to her while punching her. That makes her angry. From the lightning fast freeze-frames, Maya has picked up enough of Wolverine’s moves to be dangerous enough to the both of them.

Suddenly, Wolverine stops fighting and sarcastically smiles at her. Maya isn’t sure what’s going to happen next. Logan stretches his arms, and snikts his claws open! Maya doesn’t know what she’s seeing. She thinks she must be hallucinating, thanks to the fact of not having any kind of food or water for three days straight now. She wonders what kind of sound claws make. Logan and Maya stare at each other for a little while.

Maya eventually asks Logan if he’s one of the animal spirits. Hesitating, but still holding his claws ready, Logan jokes that of course he is. Maya apologizes for fighting him, as she didn’t mean to. She mentions to him that she’s deaf and that the lightning, er, thunder, startled her. Wolverine continues to stare at Maya for a while, and decides to snikts his claws back in. He asks Maya to follow him.

A few moments later… Wolverine, holding a beer can, asks Maya if she wants something to drink. Sitting on a tree like an owl, she explains to Logan that she can’t drink because she’s fasting. In herself, Maya notices that for an animal spirit, the man in front of her sure drinks a lot. Logan recognizes that Maya must be on a vision quest. She confirms that. He wants to know what day of her fasting is this. Maya states that it’s the fourth day; at least she thinks so. Logan remembers that Indians seem to have a thing for doing stuff in “four.” There’re the four directions and the four seasons. It seems like “four” is a cycle to them.

Maya wonders if Logan is an animal or a man. Logan hesitates for a while, and doesn’t say anything. He eventually smiles that Maya asked a good question. He even admits that he asked himself that very same question a couple of times in his life. Maya smiles and notices Logan staring at her, and wants to know what he’s doing. Logan wants a confirmation that she’s really on her fourth day of fasting. That she really didn’t have any water or food. He smiles, knowing that having no food or water can do something to a person. It opens their minds a bit, keeping it… limber. Maya stares at him, not sure about what Logan is saying.

Wolverine reveals that he comes to this place to get away from everything. But the truth is that long ago, he used to run in these woods like a wild animal. He comes here once a year to remind himself of that time of his life. It reminds him of how far he has come since then. But, it also reminds Logan that the animal is still inside him. The truth is that he’s trying real hard to be a man, to be a human being. He does his best to control the other part that lies inside every human being, the mad part that would rule them all if they let it. The part that feels wronged and hurt and lashes out wildly.

This reminds Maya of a Bible story she read when she was little. It was the story where Jacob wrestles with the angel and then the angel gives him a blessing. The chief would say there is a blessing in this story. Wolverine knows for sure that he isn’t an angel, but he already figured the chief had send Maya up here. She wants to know if Logan knows the chief. Maya starts picking up Logan’s words the best way she can in the firelight.

Logan admits that he does. He met the Chief a long time ago, back when he was an animal. It was only when Logan approached the guy then, when he was wild and snarling, wounded and full of rage, that the chief simply stood there. He talked to him in a slow and even voice. Logan remembers the Chief talking to him until he settled down. He stood there. Unflinching, unafraid. And the guy didn’t take a swing at him. Maya apologizes for that. She thought she had conquered her fear. She even met other animal spirits that approached her and on those moments, she had no fear. But with Logan, she thinks the thunder and lightning send her system into a panic.

Wolverine reveals that the chief once put him on his own vision quest. He told him that, when you are afraid, it is not something external that is causing the fear or rage, but something internal. Maya agrees with that, as she doesn’t have inner conflict. She embarked on the vision quest to help resort it. Wolverine wants to know what Maya saw on her vision quest, referring before the time she saw him. Maya mentions that she saw a bird, an own and even a dog or a wolf urinating. Logan smiles. Maya happily recalls that she also saw two dogs fighting.

Logan isn’t sure what to think of that. Maya defends that the two fighting dogs reminded her of something, but she couldn’t put her finger on it. Logan, getting a serious look on his face, remembers the Chief telling him a story called “two dogs fighting.” Maya is surprised to hear that. Logan confirms it, as the story helped him out a lot. He means in him trying to be more of a man and less of a wild animal. Maya wants Logan to tell her that story.

Retrieved from "https://heykidscomics.fandom.com/wiki/Daredevil_Vol_2_54?oldid=1420825"
Community content is available under CC-BY-SA unless otherwise noted.