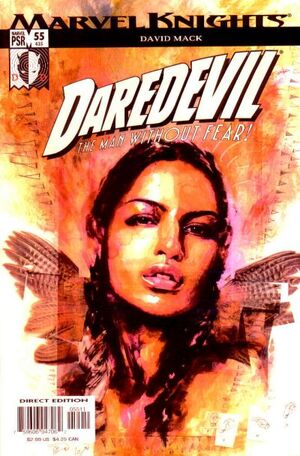 Wolverine decides to tell Maya a story the chief once told him. The story goes like this: there once was a certain guy, whom Logan suspects was an Indian as well, who was a good guy. But, Logan thinks the guy may have had some problems in the past, thinking maybe the guy got in trouble with the law a bit here and there. The guy could have had a rough childhood. Or maybe, he fell in with the wrong crowd. Or maybe just in general it felt like the guy wasn’t living up to his potential for whatever reason. And in describing his inner struggles, the guy says to the chief, “There are two dogs inside me. One of the dogs is mean and evil. The other dog is good. The mean dog fights the good dog all the time.”

And when Logan heard that story, he really understood this guy. He knew that the one dog was like your good dreams and intentions. He is full of purpose and order. He maybe represents the respect for others and for yourself. Respect for what someone can be if they put their heart in it. And the other dog, he has no respect for anything. He’s like a rabid beast, crazy and self-indulgent. He blames everyone else for his sickness. He lashes out at every opportunity. He loves nothing but wallowing in the hot darkness of his anger.

So, Logan continues, someone asks this Indian guy a question. Someone asks him which of the two dogs usually wins. And the guy sort of looks down and thinks about it for a while. He actually doesn’t say anything for a long while. Maya stares at Logan, unsure of what he’s about to say next. Logan mentions that, on that moment’s reflection, the Indian guy answers “the dog that wins is the one I feed the most.”

When Logan heard that last statement, something clicked inside of him. In his gut, he understood this story immediately. But it took him a while before he could really put his comprehension of it into words. Maya is still certain that Logan is an animal spirit, but doesn’t tell him that. Logan explains to Maya that he had a lot of things happen in his life that could be viewed as setbacks. Perhaps, one could even say that he was abused and manipulated. Logan had other people to do things to him to hurt him, people like Sabretooth, who killed his beloved Silver Fox.

The more Logan has focused on that part, and blamed others for the situations that he found himself stuck in, or for what has done to him like the adamantium skeleton, or being focused on revenge: that story of blame about the Indian guy and cycle of fear and anger was the story that Logan found himself enacting. But when he learned to shed the dents to his ego, and instead to focus on a sense of purpose and the good he experienced, Logan found that became his reality. That sense of purpose and positive intentions became the story that he was enacting.

Logan admits to Maya that the only reason he’s telling her this is because she’s on a vision quest and because he had too much to drink. But the man that told that story to the chief, well… the chief told Logan that the man who had told him that story died not much long afterwards. And Logan thought that he finally had heard about a guy who had finally figured it all out, who had figured out a major law of nature. The part of someone that thrives is the part they feed the most. Some people never understand that. They live their whole lives putting the blame on something.

But Logan knows this guy figured it out, but didn’t follow through. And he died before he could apply it. Logan knows that he used to be a real jerk. Logan corrects himself, realizing that he still is a jerk. And he also knows that sometimes the mean dog wins. But that story lit a fire under his butt and at least made him try his hardest to cultivate the potential that some people were able to see in him.

Maya cries a little at hearing this, causing Logan to ask what’s wrong. Becoming even sadder, Maya explains that she heard Logan’s story before, back when she was a kid. Her father told that story to the chief a couple of weeks right before he died. Logan is surprised to hear that about Maya’s father. Maya confirms that the story came from her father, but didn’t understand it when she first heard it. She only understands it now. Since she was a child, she has been making a conscious effort to read between the lines of everything she sees, trying to do something about her lack of hearing. She even traveled through the world, learning new things and adding those things to her repertoire.

She noticed that every art or discipline seems to have its own story or mythology. Within that story or mythology are certain luminaries or heroes that became a catalyst for progressive change. Maya knows that people can see examples of this in their recorded history. From the lessons and medicine of the nature spirits and Manitous of the Native Cultures that are passed on by their artists and storytellers. To the icons in the written, musical or pictorial stories that are told by our contemporary literary shaman. To the modern day heroes like Daredevil that walk among people and enact change by action and example. Maya has felt drawn to that world and searched for her place in it.

Maya even came to face the devil with some of these heroes. She remembers people like Elektra or the Punisher, people attempting to decipher and absorb their physical techniques into their own vocabulary of movement in the same way she learned sign language. She knows those kinds of heroes don archetypal masks, colors, or even totems in much the same way as her ancestors did in their own vision quests, or meditations or war parties. She believes it’s another way to physically actualize the creed by which they live. Maya has been intrigued by these archetypes and the stories that they enact. But there was always a certain anger in her heart she couldn’t let go off. And she knows that got her and her relationship with Daredevil in trouble.

But it turns out that it is her own father’s story, the words of a man long dead, that made things clear to her. And she wants Logan to know that she’s grateful for that. She thanks him for telling her father’s words to her in a way she understands. She is glad her father’s story in Logan’s own clumsy language helped him out too. It shows her the impact, the ripple effect, that stories have in these world. Logan remains silent, unsure what to say.

Maya continues to explain that, instead of only searching for meaning in historical mythology, or the mythology of modern heroes, she realizes that people are writing their own mythology every day of their lives. And she supposes that each of Earth’s people have within themselves, within their stories, the power of the Manitou. The power to plant something positive in the hearts of those that need it. But she remembers that she has had for no food or water for three days. And that it is her own mind, her own perceptions that are changing. And that everyone has the power to cultivate that seed, when its planted in our hearts.

After saying those words to Wolverine, still thinking he is the animal spirit of the night, Maya closes her eyes for a little while and sleeps. But something not quite like sleeping happened. She saw a bird flying in a dream. And for the first time she heard the noise that clouds made. And when she opened her eyes, the bird was in the sky. But it was sunrise. And Wolverine was gone.

present time… Maya tells what happened to the chief. The stones were still hot from Wolverine’s fire and, she confirms, both the words of Wolverine and her father’s still dance alive in her head. She wonders if it was all a dream. The chief denies that, revealing to Maya that she had a vision. He tells her that her father spoke to her on this vision quest and spoke through her like a nature spirit. That this was her father’s way of communicating to his daughter beyond the veil of the temporary material world. This was Lincoln’s way of guiding Maya. The vision quest lifts the veil separating the worlds. He made it easier for her to hear. It makes Maya sensitive to the sign language of God.

Maya has been shown her path in life. The vision showed her the importance of her father’s stories. She has been handed down something very important: the mantle of the storyteller. Now, Maya is a shaman to a tribe without boundaries.

Later, Hell’s Kitchen, night time... Daredevil meets up with Maya. He heard she has been performing at the theater again, performing her stories in sign language, dance and played music. She played for the deaf children and to anyone who wanted to watch or listen. But Matt knows Maya did it in her own shadow puppet way. Matt smiles, content to have attended Maya’s play called “Parts of a Hole” and even recognized himself in it. He even intends to go see her other play, “The Echo Story,” with a friend of his. He understands that it concludes stories of her father, who passed away, and about her childhood, growing up deaf and learning to use her unique perspective as an asset instead of her handicap.

Matt tells Maya that he is glad she found her place. Maya doesn’t bother to read Matt’s lips and just stares at him. And when she moves closer to Daredevil to kiss him, he doesn’t stop him. They kiss. Maya leaves, realizing that Matt only let her kiss him because he knew it meant goodbye.

Maya puts on her Echo uniform and performs another play at the local theater.

Retrieved from "https://heykidscomics.fandom.com/wiki/Daredevil_Vol_2_55?oldid=1420826"
Community content is available under CC-BY-SA unless otherwise noted.