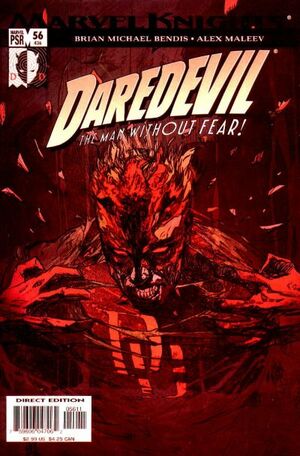 Appearing in "The King Of Hell's Kitchen" (Part 1)Edit

Synopsis for "The King Of Hell's Kitchen" (Part 1)Edit

It has been a year since DD proclaimed himself the new Kingpin of Hell's Kitchen, and Ben Urich fills in a shadowed figure about the events of that time period; Matt has effectively renovated his borough of New York and kept crime at bay; He has weathered the harsh criticism of his super-heroic peers; But he ends up facing the Yakuza, who feel that they can take down one lone man and claim the Kingpin's old territory as their own.

Retrieved from "https://heykidscomics.fandom.com/wiki/Daredevil_Vol_2_56?oldid=1420827"
Community content is available under CC-BY-SA unless otherwise noted.