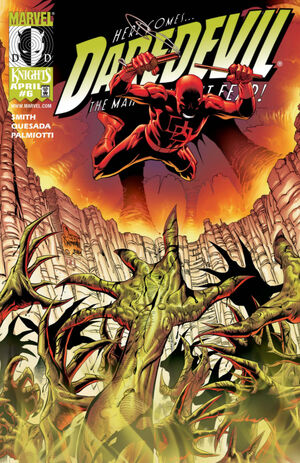 Regardless of the size of the audience... Always make an entrance boy...Always Make An Entrance!

Matt agonizes over Karen's death and contemplates suicide with a gun, but with his memory of Karen advising he never gives up on his mission as a vigilante, DD pulls himself together and searches out Macabes by pumping Turk for information, who provides him an address. DD fights through Macabes' men disguised as the Hand on the 1F, climbing an elevator filled with video projections and grabbing a piece of synthetic cloth. DD is then aided by Baal, and DD realizes that Baal is just another costume which he couldn't detect the machinery on Baal's body earlier due to Macabes' drug and the noise during his imprisonment affecting his heightened senses. After confirming this, DD arrives at Macabes' office only to learn that he is actually Mysterio in disguise.

Retrieved from "https://heykidscomics.fandom.com/wiki/Daredevil_Vol_2_6?oldid=1420776"
Community content is available under CC-BY-SA unless otherwise noted.