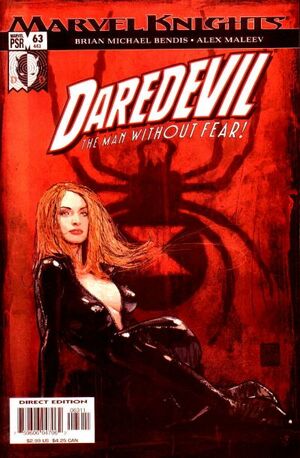 Appearing in "The Widow Part 3"Edit

Synopsis for "The Widow Part 3"Edit

Matt detects a nearby assassin who unknown to him was hired by the government to kill the Black Widow. He faces the man as Daredevil thinking that he may have been hired by Jigsaw due to their recent encounter. Though DD overpowers the assassin at first, the man responds by using a small sonic device that creates a loud enough sound to overpower DD's heightened sense of hearing leaving him helpless and unable to fight back. Black Widow arrives and drives off the assassin after a brief battle with him.

Demanding answers as to why she came back to New York, Natalia reveals to Matt back at his apartment that since Nick Fury called her while she was on assignment which he never does she can surmise it has to do with being traded or sold off. She also mentions that the assassin is likely an ex-SHIELD agent since he got access to Murdock's SHIELD files and the device he used to beat DD was designed by SHIELD to be used against DD if necessary. However, their conversation is interrupted by the arrival of Jigsaw and his men and Matt cannot become DD to fight them in order to protect the life he has built, otherwise the authorities will be able to prove that he is DD.

Retrieved from "https://heykidscomics.fandom.com/wiki/Daredevil_Vol_2_63?oldid=1420834"
Community content is available under CC-BY-SA unless otherwise noted.