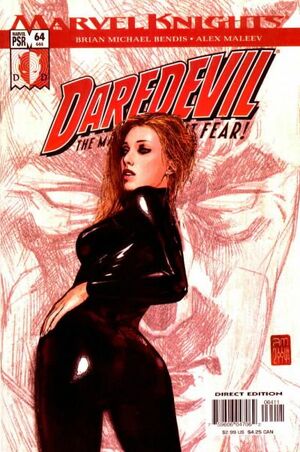 Appearing in "The Widow Part 4"Edit

Synopsis for "The Widow Part 4"Edit

Rather than prove completely that he is DD, Matt has to let the police and the Widow break up a home invasion of the Murdock residence by Jigsaw; SHIELD catches up with Quinn who has been trying to kill the Widow; Fury contacts the government official who had secretly ordered the Black Widow's death and blackmails him to stand down. Natasha confronts the man who was responsible for the ordeal, the Bulgarian minister and her ex-husband, though he lets Madame Hydra go free as his way of punishing her; Matt begrudgingly gives Milla the annulment to their marriage.

Retrieved from "https://heykidscomics.fandom.com/wiki/Daredevil_Vol_2_64?oldid=1420835"
Community content is available under CC-BY-SA unless otherwise noted.