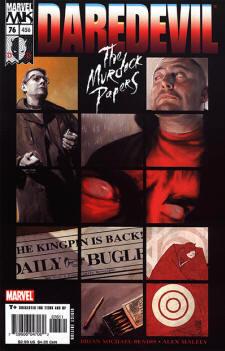 Ben Urich is being driven to a Maximum Security Penitentiary in Leavenworth, Kansas for a meeting with Wilson Fisk.

In Hell's Kitchen, two thieves are robbing money as they get into their getaway van with the driver already starting to drive gets hit with a billy club through the windshield and the car hits a fire hydrant. Daredevil pulls the driver out through the door window as people in the street are watching, the thief in the passenger side starts firing a gun and from his window is elbowed in the face. The last man exits from the back of the van and is firing his gun wildly. Daredevil attacks from behind, knocking him down and smacks the man across the face with his gun. Daredevil returns the money and people start clapping and cheering for him, he smiles pleasingly.

Back in the penitentiary Fisk tells Urich that he wants to make a deal with the FBI when the facility is attacked but then cleared, apparently Fisk always being constantly attacked and has to keep moving from different locations from finding out where is he is. He tells Urich for start taking notes for his headline story and continues to explain his deal. He is making the offer through the public and not the FBI because they are crooks so that the deal have a 50/50 chance. The FBI does not have anything on him but wants out and is willing in exchange for whatever he wants is willing to give "him" up.

At the office of Nelson and Murdock, Foggy shows Matt the latest issue of the The Pulse with Daredevil as the number superhero in New York. Foggy suggests they should go out to celebrate when they interrupted by Milla Donovan, Matt's former wife who he has not seen for months, and also a call from Urich which Matt tells his secretary to take a message.

Later Foggy walks by the newsstand, he sees the early edition of the Daily Bugle and on the cover is Matt and The Kingpin with the captions "Kingpin Tells All" and "The Truth About Murdock, REVEALED"

Retrieved from "https://heykidscomics.fandom.com/wiki/Daredevil_Vol_2_76?oldid=1420847"
Community content is available under CC-BY-SA unless otherwise noted.