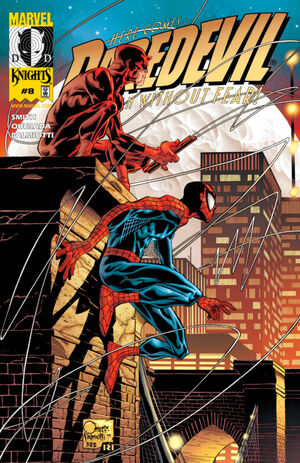 The funeral of Karen Page. Additionally Daredevil has a private meeting with Spider-Man. After he has Daredevil tell him what happened with his late arch-enemy, Spider-Man, who also had a similar problem in the past of losing a loved one due to the life of a superhero helped Daredevil see that he was at least able to the save the child's life despite everything that happened before leaving. Murdock visits Black Widow the next day who is still bitter with him for attacking her last time they met, but after Murdock explains the truth, she speculates that other than just Mysterio's drug, Matt's own inner turmoil due to the complicated life he had to lead was also part of his recent insanity.

Foggy is released from prison with his innocence confirmed, but is sad as this incident has cause him to break up with Liz Osborn. Even though his mother had made a recent offer for both him and Matt to rejoin her law firm, Foggy doesn't feel like doing so, since she did not try to help prove his innocence or visit him in prison. However, due to Matt being named as the sole beneficiary in the life insurance policy that Karen had with her radio job, he is to be given a large sum of money in Karen's will. Having wrote in her will that Matt should spend the money on himself, rather than donate it, Matt decides to use that money for him and Foggy to re-establish their own law firm at the location of where Matt's former apartment stood before the Kingpin blew it up.

Matt also visits with his mother in the hospital who reveals that the baby is going to be adopted by a childless couple from New Jersey and asks what the baby's name is. Matt decides to name the baby Karen, after the late Karen Page.

Retrieved from "https://heykidscomics.fandom.com/wiki/Daredevil_Vol_2_8?oldid=1509767"
Community content is available under CC-BY-SA unless otherwise noted.