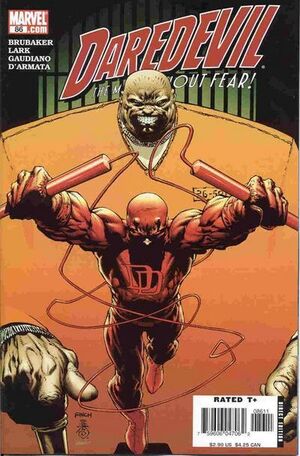 In this issue Matt Murdock gets a visit from his wife Milla Donovan and Becky Blake on Ryker's Island awaiting his trial. Becky tells Matt that her and Dakota North are following a lead to someone that knows the identity of the person donning the mask of his alter-ego Daredevil and taken over his duties in Hells Kitchen. As they are talking Matt listens to the conversations around the prison of the full-scale riot about to start. As the guard is sending Matt back to his cell he waits and listen until Milla and Becky are off the island and onto the ferry, then makes his move knocking out the guard. He runs to save the warden from being killed prisoners with weapons from the guards and tells the warden that the prison riot is to get Kingpin and himself. The Kingpin is fighting alone against all the other convicts which is soon joined by Matt fighting alongside with him. They are backed into a wall and are getting overwhelmed by convicts as Kingpin says someone else will join them. As the riot ensues the warden watches it happen on monitor he he asks his guard what is the Punisher doing and responds he's sitting in his cell and reading a book but has still killed four men. Bullseye, who was freed earlier by Turk on Kingpin's orders, soon joins Matt and the Kingpin from the upper levels with a pair of shotguns. When the fighting stops Kingpin says to Matt the plan has changed from just them two getting out on the helicopter that Bullseye is joining them. Matt argues that it was not part of the agreement and he should not be allowed. He then attacks Bullseye, when he breaks free and tries to shoot Matt but dodges the shot so it hits Kingpin in the leg and knocks Bullseye out. He leaves them both to find the Punisher in his cell and has a shotgun for him and asks for his help.

Retrieved from "https://heykidscomics.fandom.com/wiki/Daredevil_Vol_2_86?oldid=1420857"
Community content is available under CC-BY-SA unless otherwise noted.