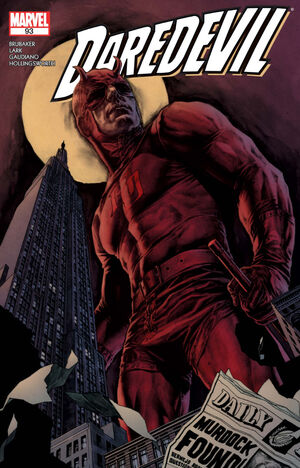 Appearing in "The Devil Takes A Ride conclusion"Edit

Synopsis for "The Devil Takes A Ride conclusion"Edit

Matt finds out Foggy is still alive, and also helps release the Kingpin from prison in order to honor Vanessa's memory, though he has the Kingpin agree to have his U.S. Citizenship revoked and that Fisk will have to leave the country. Foggy agrees with Matt's idea to move their law firm to a new location as well changing their business method of accepting clients from referrals only to avoid drawing attention from DD's enemies. It is also decided that Becky Blake will join their firm as a law partner. Matt also moves him and Milla to a new apartment as well since too many of his enemies already knew the address of his previous apartment.

Retrieved from "https://heykidscomics.fandom.com/wiki/Daredevil_Vol_2_93?oldid=1493479"
Community content is available under CC-BY-SA unless otherwise noted.