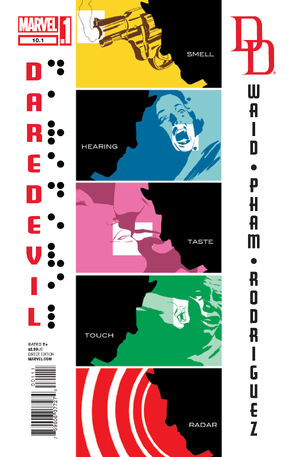 Matt Murdock goes to the Queens County Meta-Holding Facility to see Mr. Nolan, a client, all the while being jokingly referred to as Daredevil by the staff. One of them even whispers that they'll look the other way if he decides to beat up his client again.

After going through security, he enters the holding cell where Nolan, also called Pyromania, is being kept. His pyrokinetic powers are held in check by changing temperatures, a hard cot, and loud noises that blare constantly. Nolan has asked for Murdock because he considers this a cruel and unusual punishment. Nolan produces a puff of fire in Matt's face to see if he is really blind, believing a blind man couldn't be able to take him down, alleviating his suspicions that he is Daredevil.

Nolan then tells the story of why he was hired to come after Matt, the reason he is in this holding cell. On a Monday, Matt was with a client when a fire broke out in the building. Matt saw Pyromania's silhoutte in the thick of the fire and changed into Daredevil. From behind, he threw Pyromania out the window, both making a safe landing on the ground. Daredevil could smell something underneath him, where the sewer was undergoing maintenance. Jumping down a manhole, he broke a methane vent, so that when Pyromania followed after him and sparked a fire, he was caught in the ensuing explosion.

Nolan finishes his story and admits he was hired to bring Matt to the Hellfire Club, who caught wind of the drive he has in his possession. Hoping to complete his job, Nolan takes him hostage and tells him to call for the guard to open the door. Shortly after, he calls for the guard. When he opens the door, he finds that Matt has beaten Nolan so badly that he's spooked him into yelling that Matt isn't Daredevil. Regardless, he tells them that he plans to file Nolan's appeal because he considers the way he is treated is cruel and unusual punishment.

On his way home, he thinks about the Omegadrive, the hard drive he stole that contains information on Hydra, A.I.M., Black Spectre, Agencè Byzantine, and the Secret Empire.

At the Latverian Embassy in New York City, representatives from all five crime organizations meet to discuss how they will handle their situation, but none of them are able to come up with an effective idea. Their meeting is interrupted by Daredevil, angry that none of them have come after him yet, so he decides to make the first move. Since it was Black Spectre that tried to steal the drive from him the other day, he reveals to everyone that he had Reed Richards transfer the data on Black Spectre within the drive to the Daily Bugle servers and gave the incriminating evidence to the government, shutting down Black Spectre permanently. Daredevil leaves, telling them to make a move quickly. Shortly after he leaves, the four other representatives kill Black Spectre's representative.

• Pitting The Man Without Fear Against A Cabal Of Villainous Secret Societies Sworn To Bringing Hornhead To His Knees! •Setting The Stage For This Month’s Daredevil/Spider-Man/Punisher Crossover “The Omega Effect”!

Retrieved from "https://heykidscomics.fandom.com/wiki/Daredevil_Vol_3_10.1?oldid=1420927"
Community content is available under CC-BY-SA unless otherwise noted.