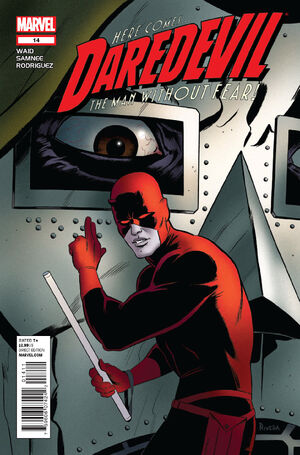 The gas. It's dulling my senses -- no -- eliminating them. Taste and smell are gone...and judging by the growing numbness around a broken rib that should be agonizing, touch is fading, too.

• Daredevil imprisoned in Latveria for crimes against the state – and no amount of lawyering can get him out of there!

• Meanwhile, Foggy uncovers more evidence that Matt’s not quite the man he seems.

Retrieved from "https://heykidscomics.fandom.com/wiki/Daredevil_Vol_3_14?oldid=1420904"
Community content is available under CC-BY-SA unless otherwise noted.