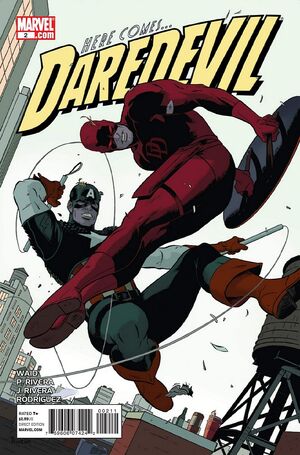 DAREDEVIL'S BACK...BUT NOT EVERYONE'S HAPPY! Given his recent past, Matt Murdock has a lot to answer for and Captain America is doing the cross-examining. Daredevil's quickly learning that burned bridges with his friends and former allies aren't easy to repair particularly when Klaw, the Master of Sound, is on his tail!

Retrieved from "https://heykidscomics.fandom.com/wiki/Daredevil_Vol_3_2?oldid=1651095"
Community content is available under CC-BY-SA unless otherwise noted.